Life isn’t over: how best to communicate with people living with dementia 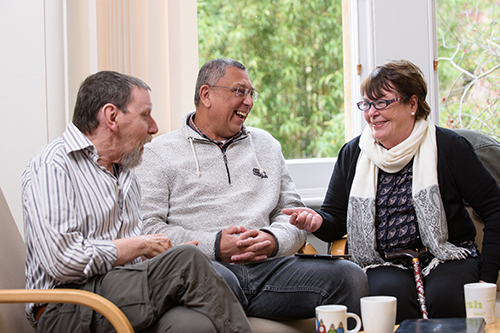 When Sandie Read was diagnosed with dementia at 57, she felt a mixture of fear, anxiety and depression. Fifteen years later and not only is she offering support to fellow sufferers but she’s also working with researchers to improve the way people communicate and interact with those living with the condition.

Sandie and her friends Roy James and Harry Davis met at the Forget Me Not Centre in Swindon, a service run by Avon and Wiltshire Mental Health Partnership for people with early onset dementia.

They formed a research group and have been working with the University of Bristol to create a series of videos to help train both support workers and those they interact with regularly.

This is the first time people with dementia have been co-researchers on a project like this, with their insights, published in the Journal of Dementia Care, potentially helping to improve the lives of over 850,000 people in the UK living with dementia.

Sandie, aged 72, said: "Everyone will tell you the same thing. You're diagnosed, and then it’s 'you've got dementia. Go home and we’ll see you next month'.

"What we need is for someone, like a counsellor or someone else with dementia, to tell us at that point 'life isn't over'.  You can go on for ten or 15 years. And you’re not told, you’re just left. And I thought, tomorrow my day had come.

"The fear and the anxiety sets in, and then the depression sets in, doesn’t it? I think when you’re diagnosed, you should be given a book. And on the front of the book, in big letters, it should say: 'Don’t panic'."

From communicating diagnosis to subsequent everyday communications, researchers wanted to learn more about how support workers, practitioners or volunteers and friends talk with people with dementia, and what works best so that both people can have a good conversation.

The research team collected and analysed almost 10 hours of video-recorded interactions, with over 70 people with dementia, alongside 14 interviews.

Sandie, Roy, and Harry helped to review the video material, commenting on the communication issues they saw.

They also re-imagined how they would like communication to happen, so that they could take part in conversations on a more equal basis.

Direct questions such as 'do you remember?' often presented difficulties for people on the videos, because they could be put 'on the spot'. They also found it was hard when several questions were asked at the same time.

Researchers from the Forget Me Not group put a lot of emphasis on listening, showing interest, giving people time to think and respond, not finishing off their sentences and maintaining eye contact.

They said it was important to take time, that they did have things to say, but that they did not like to feel pressured with too many direct questions.

"Sandie, Roy and Harry have a real passion for using their experiences to make a positive impact for others living with the condition in the future. It's important to get this right from diagnosis to ensure people living with dementia are listened to and are given the opportunities to make valuable contributions to society."

Professor Val Williams, from the Norah Fry Centre for Disability Studies at the University of Bristol, led the wider Getting Things Changed project, which this research was part of.

She said: "Tailoring interactions to the needs of the moment is a skilled task, but one which we all do, without conscious planning, most of the time. Getting it right can shape how people with dementia feel about themselves, so we’re hopeful our insights will make a difference to their daily lives."

Harry Davis is in his 60s, loves a good pub quiz, and despite living with dementia, he has recently become a good amateur photographer.

He said: "There is room for us to learn from each other, and try to do things differently, to make life easier for each other. Part of that is having lots of patience, and understanding what life is like for the other person."

Roy James, 70, describes himself as a survivor. He worked in a bookshop in the past, before he had a diagnosis of dementia, and he still enjoys reading.

He said: "We hope these videos will be useful for everybody to see, from the doctors to the patients. The message is to listen. We've got to get it across to them that people have to listen to us. We are the experts in what it’s like to live with dementia."

This research was part of the Getting Things Changed project, funded by the Economic and Social Research Council (ESRC).

The videos produced as part of this research are available to watch and download on the project's website.