Protocells use DNA logic to communicate and compute 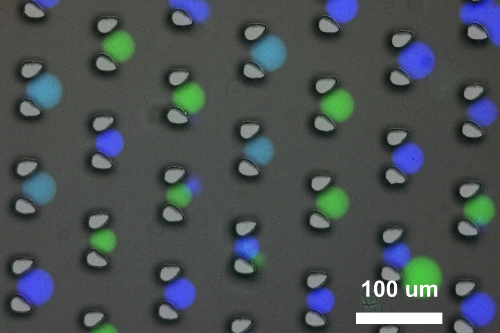 Researchers at the University of Bristol, Eindhoven University of Technology and Microsoft Research have successfully assembled communities of artificial cells that can chemically communicate and perform molecular computations using entrapped DNA logic gates.

The work provides a step towards chemical cognition in synthetic protocells and could be useful in biosensing and therapeutics.

Molecular computers made from DNA use programmable interactions between DNA strands to transform DNA inputs into coded outputs.

However, DNA computers are slow because they operate in a chemical soup where they rely on random molecular diffusion to execute a computational step.

Assembling these processes inside artificial cell-like entities (protocells) capable of sending DNA input and output signals to each other would increase the speed of the molecular computations and protect the entrapped DNA strands from degradation by enzymes present in blood.

In a new study published today in the journal Nature Nanotechnology, a team led by Professor Stephen Mann from the University of Bristol’s School of Chemistry and Professor Tom de Greef from the Department of Biomedical Engineering at Eindhoven University of Technology have developed a new approach called BIO-PC (Biomolecular Implementation Of Protocell communication) based on communities of semi-permeable capsules (proteinosomes) containing a diversity of DNA logic gates that together can be used for molecular sensing and computation.

Compartmentalisation increases the speed, modularity and designability of the computational circuits, reduces cross-talk between the DNA strands, and enables molecular circuits to function in serum.  This new approach lays the groundwork for using protocell communication platforms to bring embedded molecular control circuits closer to practical applications in biosensing and therapeutics.

“This should bring molecular control circuits closer to practical applications and provide new insights into how protocells capable of information processing might have operated at the origin of life.”