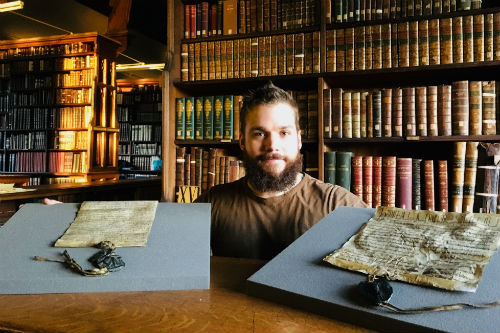 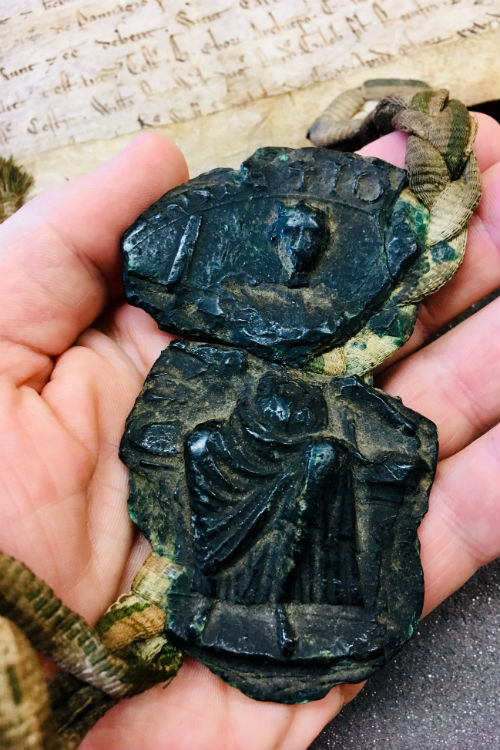 Image of the royal charter seal University of Bristol

A rare, original royal charter from the first year of King John’s reign has been discovered in Durham by a medieval historian from the University of Bristol.

The document, which was not previously known to have survived, carries the seal of King John and is dated 26 March 1200, issued in York, exactly 819 years ago today.

The document is held in the archives of Ushaw College Library, one of the core collections forming part of the Durham Residential Research Library (RRL), managed by Durham University.

It was identified by Dr Benjamin Pohl during his time as a Lendrum Visiting Fellow at the RRL.

Dr Pohl, a Senior Lecturer in Medieval History at the University of Bristol, came across the charter by chance while examining the medieval manuscript holdings of Ushaw College Library, assisted by Durham University archivist Dr Jonathan Bush.

Dr Pohl immediately recognised the document as an original royal charter, carefully prepared and written in what is known as a ‘court hand’, likely belonging to a professional scribe, who might have been a member of the king’s government department or chancery.

Prior to this discovery, less than a dozen original charters were known to have survived from the first year of King John’s reign, making this a hugely exciting find for historians.

Professor David Cowling, Pro-Vice-Chancellor for Arts and Humanities, Durham University, said: “Discovering ancient documents like this gives us a fascinating new glimpse into the past.

“For one of our visiting fellows to identify an item from the collection as a previously-uncatalogued medieval royal charter is a wonderful example of the benefits and advances that can be made by working and exploring our archives together.”

The document confirms the granting of possessions in County Durham, namely the two hamlets of Cornsay and Hedley Hill, to Walter of Caen and Robert FitzRoger, Lord of Warkworth and Sherriff of Norfolk and Suffolk.

Walter and Robert were nephews of Simon, a chamberlain of Durham who had originally received these grants from his bishop, Hugh de Puiset, sometime before 1183, but who later decided to part with the bequests in order to provide for his two younger relatives.

The bishop’s charter recording the original grants to Simon is also held within the Durham Residential Research Library collections, allowing the two original documents to be compared and studied side-by-side for the first time.

The discovery of the original charter enabled comparison with a copy, captured on a medieval administrative record known as a ‘charter roll’, which revealed a surprising difference.

Whilst the charter roll copy listed just three witnesses present when the charter was issued at York, the original charter, found in Durham, lists nine witnesses, including some of the most powerful individuals of the time, several of whom held prominent positions in King John’s government.

Dr Pohl said: “Discovering the original charter at Ushaw is extremely exciting, not least because it allows us to develop a fuller picture of the people who were present at York on 26 March 1200 and eager to do business with the new king.

“Medieval charters are important not just because of the legal acts they contain, but also for what they can tell us about the society and political culture at the time. Indeed, their issuing authorities, beneficiaries and witnesses provide a cross section of medieval England’s ruling elites.

“Our charter might best be described, therefore, as a kind of ‘who’s who’ of Northern England (and beyond) at the turn of the thirteenth century.”

Monsignor John Marsland, President of Ushaw, said: “This is a significant and exciting discovery from the historic library at Ushaw.

“It is as a direct result of the Residential Research Library project which draws on resources from the three major collections and I am delighted that Dr Pohl’s visit here has increased the breadth of knowledge relating to the Ushaw College Library.”

In addition to the Archbishop of York, the Chief Justiciar of England and the Sheriff of Yorkshire and Northumberland listed in the charter roll, the original charter also names the Constable of Chester, the Sheriff of Berkshire, Cornwall and Devon, the Royal Justice and Baron of the Exchequer, the Lord of Kendal, one Germanus Tison and even the bishop’s own son Henry as witnesses. The possible reasons for the charter roll’s omission of these witnesses will be explored in Dr Pohl’s forthcoming edition and study of the document.