Reconstruction of Eocoracias brachyptera with hypothesised plumage colouration. Reconstruction by Marta Zaher, PhD at the University of Bristol. 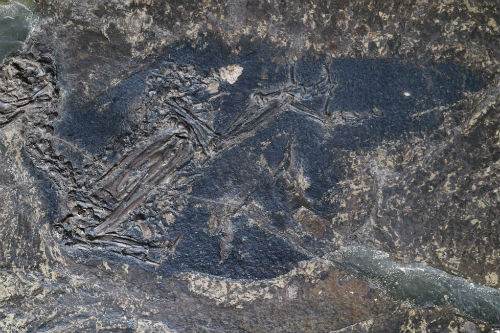 Examining fossilised pigments, scientists from the University of Bristol have uncovered new insights into blue colour tones in prehistoric birds.

For some time, paleontologists have known that melanin pigment can preserve in fossils and have been able to reconstruct fossil colour patterns.

This can be observed by studying the melanin packages called melanosomes, which are shaped like little cylindrical objects less than one-thousandth of a millimetre and vary in shape from sausage shapes to little meatballs.

However, besides iridescent colours, which is structural, birds also make non-iridescent structural colours.

Those are, for example, blue colour tones in parrots and kingfishers. Until now, it was not known if such colours could be discovered in fossils.

This blue structural colour is created by the dense arrangement of cavities inside feathers, which scatters the blue light. Underneath is a layer of melanin that absorbs unscattered light.

Paleontologists have shown that the feather itself, which is made of keratin, does not fossilise while the melanin does. Therefore, if a blue feather fossilised, the dark pigment may be the only surviving feature and the feather may be interpreted as black or brown.

By looking at plumage colourations of modern representatives of fossil specimen and reconstructing which colour was the most likely present in the fossil specimen, they were able to discriminate between melanosomes significant for grey and blue colour, leading to the reconstruction of prehistoric Eocoracias brachyptera as a predominantly blue bird.

Frane Barbarovic said: “We have discovered that melanosomes in blue feathers have a distinct range in size from most of colour categories and we can, therefore, constrain which fossils may have been blue originally.

“The overlap with grey colour may suggest some common mechanism in how melanosomes are involved in making grey colouration and how these structural blue colours are formed.

“Based on these results in our publication we have also hypothesized potential evolutionary transition between blue and grey colour.”

The research team now need to understand which birds are more likely to be blue based on their ecologies and modes of life. The blue colour is common in nature, but the ecology of this colour and its function in the life of birds is still elusive.

Frane Barbarovic added: “We also need to understand how grey colour is made. This is made in a very different way in birds than it is in mammals. We believe it is related to how the melanosome shape can result in a kind of self-assembling process in the feather and the surface tension of the melanosomes pull them into certain configurations inside a feather as it forms.”