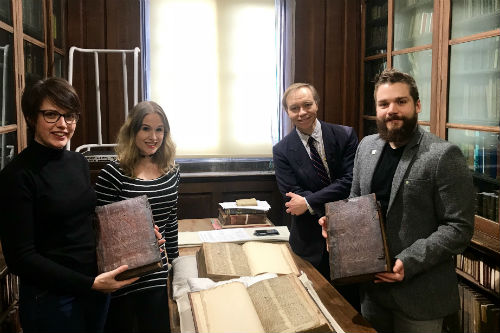 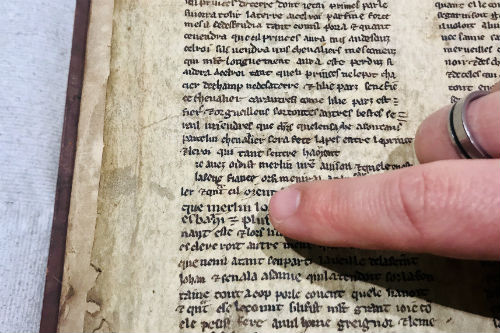 A chance discovery, hidden away in a series of 16th-century books deep in the archive of Bristol Central Library, has revealed original manuscript fragments from the Middle Ages which tell part of the story of Merlin the magician, one of the most famous characters from Arthurian legend.

Academics from the Universities of Bristol and Durham are now analysing the seven parchment fragments which are thought to come from the Old French sequence of texts known as the Vulgate Cycle or Lancelot-Grail Cycle, dating back to the 13th century.

Parts of the Vulgate Cycle were probably used by Sir Thomas Malory (1415-1471) as a source for his Le Morte D’Arthur (published in 1485 by William Caxton) which is itself the main source text for many modern retellings of the Arthurian legend in English, but no one version known so far has proven to be exactly alike with what he appears to have used.

In addition, one of the most exciting elements of this particular find is that the Bristol fragments contain evidence of subtle, but significant, differences from the traditional narrative of the stories.

The seven hand-written parchment fragments were discovered by Michael Richardson from the University of Bristol’s Special Collections Library who was looking for materials for students studying the history of the book for the new MA in Medieval Studies.

They were found bound inside a four-volume edition of the works of the French scholar and reformer Jean Gerson (1363-1429) and, recognising a number of familiar Arthurian names, Michael contacted Dr Leah Tether, President of the International Arthurian Society (British Branch), from Bristol’s Department of English to see if the finds were in any way significant.

Dr Tether immediately recognised the text they were from and pulled together a team of experts including her husband, medieval historian and manuscript specialist Dr Benjamin Pohl from the University of Bristol’s Department of History and Dr Laura Chuhan Campbell, a specialist in the Old French Merlin stories from the University of Durham, who are now investigating further.

Pooling their expertise, the team will attempt to discover more about the fragments’ journey to Bristol, including when and where they were made and how they came to be bound in the Gerson volumes. Together, the team members will produce a full transcription and edition of the fragments, alongside a description of their manuscript context, to enable scholars the world over to engage with the Bristol Merlin.

Dr Tether said: “These fragments of the Story of Merlin are a wonderfully exciting find, which may have implications for the study not just of this text but also of other related and later texts that have shaped our modern understanding of the Arthurian legend.

“Time and research will reveal what further secrets about the legends of Arthur, Merlin and the Holy Grail these fragments might hold.

“The South West and Wales are, of course, closely bound up with the many locations made famous by the Arthurian legend, so it is all the more special to find an early fragment of the legend - one pre-dating any version written in English - here in Bristol.”

The books in which the fragments were found were all printed in Strasbourg between 1494 and 1502. At some point, these books made their way to England (probably unbound), and the style of the binding suggests they may have been first bound here in the early 16th century.

At this point, the manuscript fragments may simply have been languishing in the binder's workshop amongst a selection of 'waste materials' that were often used in bindings in this period.

Parchment was often re-used in this way because it was a costly item - it wasn't always worth using brand new clean sheets for incidental purposes such as in bindings.

Damage to the leaves suggests that at this point in their history that the fragments would have been included into the binding as pastedowns (that is the sheets that are stuck to the boards at the front and back of books, which connect the pages to the binding).

The books then seem to have been rebound at a later date into their current form, whereby the pastedowns were 'lifted' and became flyleaves (that is, the 'spare' pages you get at the front and back of books).

Dr Tether added: “Since it is our suspicion that there was once an eighth leaf (now missing from the front of the fourth volume), we believe that the process of lifting the pastedowns led to one leaf becoming irreparably damaged, and so it was simply disposed of. The other leaves do in fact have significant damage from the same process, so whilst this is conjecture, it seems plausible.”

The seven leaves represent a continuous sequence of the Estoire de Merlin narrative (though they are bound 'out of chronological order' in their current form) - specifically in a section known as the 'Suite Vulgate de Merlin' (Vulgate Continuation of Merlin).

Events begin with Arthur, Merlin, Gawain and assorted other knights, including King Ban and King Bohors preparing for battle at Trebes against King Claudas and his followers.

Merlin has been strategising the best plan of attack. There follows a long description of the battle. At one point, Arthur's forces look beleaguered but a speech from Merlin urging them to avoid cowardice leads them to fight again, and Merlin leads the charge using Sir Kay's special dragon standard that Merlin had gifted to Arthur, which breathes real fire.

In the end, Arthur's forces are triumphant. Kings Arthur, Ban and Bohors, and the other knights, are accommodated in the Castle of Trebes.

That night Ban and his wife, Queen Elaine, conceive a child. Elaine then has a strange dream about a lion and a leopard, the latter of which seems to prefigure Elaine's yet-to-be-born son. Ban also has a terrifying dream in which he hears a voice. He wakes up and goes to church.

We are told that during Arthur’s stay in the kingdom of Benoic for the next month, Ban and Bohors are able to continue to fight and defeat Claudas, but after Arthur leaves to look after matters in his own lands, Claudas is once again triumphant.

The narrative then moves to Merlin’s partial explanation of the dreams of Ban and Elaine. Afterwards, Merlin meets Viviane who wishes to know how to put people to sleep (she wishes to do this to her parents). Merlin stays with Viviane for a week, apparently falling in love with her, but resists sleeping with her. Merlin then returns to Benoic to rejoin Arthur and his companions.

In the newly discovered fragments, there tend to be longer, more detailed descriptions of the actions of various characters in certain sections - particularly in relation to battle action.

Where Merlin gives instructions for who will lead each of the four divisions of Arthur's forces, the characters responsible for each division are different from the version of the narrative we know.

Sometimes only small details are changed - for example, King Claudas is wounded through the thighs in the known version, where in the fragments the nature of the wound is left unsaid, which may lead to different interpretations of the text owing to thigh wounds often being used as metaphors for impotence or castration.

Dr Tether added: “There are many more differences, too, but because of the damage to the fragments, it will take time to decipher their contents properly, perhaps even requiring the use of infra-red technology. We are all very excited to discover more about the fragments and what new information they might hold.”