A new reptile species from Wales named by Bristol student 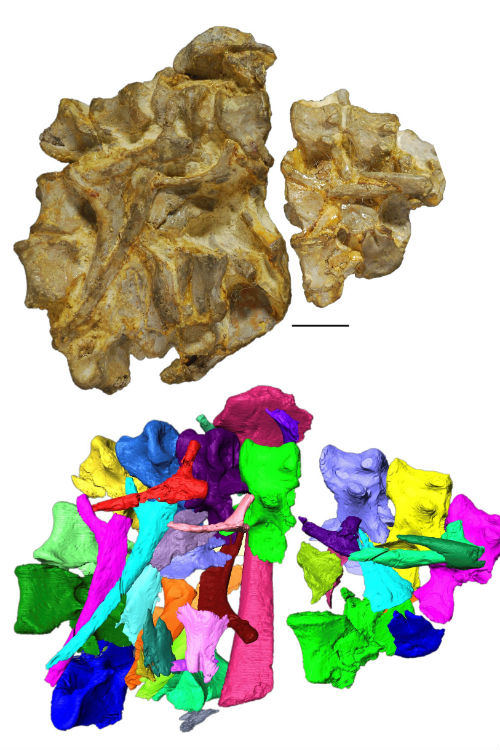 The type specimen of Aenigmaspina pantyfynnonensis, photograph and 3D scan model, produced by Erin Patrick as part of her Masters thesis work in Bristol. This little block, the size of the palm of your hand, shows the backbone, curved round from top right to bottom left, and in the middle the ribs and shoulder blades. Scale bar is 1 cm. University of Bristol

After resting for decades in the storerooms of the Natural History Museum in London, a fragmentary fossil from the Late Triassic (200 million years ago) has been named as a new species by a Masters’ student at the University of Bristol.

Erin Patrick studied this creature for her MSc Palaeobiology dissertation research under the supervision of Professor Mike Benton and Dr David Whiteside from Bristol’s School of Earth Sciences.

The fossil is one of several novel species named from Pant-y-ffynnon Quarry in Wales. It was found in the 1950s but has been ignored since then because it was so tiny and hard to study.

Most of the specimen is in two blocks of rock that fit together to form a lump that would sit on a child’s hand. On the surface are small bones, but it revealed its treasures when it was scanned. While no skull is present, these blocks contain a number of vertebrae, ribs, one scapula, and tiny armour plates from its back.

Using CT scanning, these tiny bones (some mere millimetres wide and long) could be studied in three-dimensional detail, allowing Erin to examine fossils otherwise hidden in the rock.

When she first saw the scans, Erin commented: “I was amazed. The rock and small fossils looked like nothing in particular, but the scans showed up fantastic detail. I worked on the images at ten times magnification to see all the minute features.”

When the fossil was found, its discoverers dubbed it “Edgar”, but as a new species it has now been given the formal name Aenigmaspina pantyffynnonensis.

Erin added: “While creating the 3D models, I was looking for anatomical features that would say what this new beast was.

“We could see it wasn’t a dinosaur, and the spine tables and armour plates put it on the crocodile side of the evolutionary tree.

“During the Triassic, there was a flurry of different reptile groups emerging related to modern crocodiles, but most of these were pretty huge and had special features not present in Aenigmaspina.”

Professor Benton said: “We were able to code Aenigmaspina for 100 or so characters and calculate its most likely position in the tree of life, but the answers were not 100 percent certain. It seems to be a relative of another little armoured beast called Erpetosuchus known from the Late Triassic of north-east Scotland and the eastern United States.”

Dr Whiteside said: “Erin’s work has added important knowledge to our understanding of Late Triassic faunas worldwide and particularly to the animals present in South Wales during that time.

“We know that Aenigmaspina lived on a small limestone island, part of a sub-tropical archipelago and this brings the number of major new species described from Pant-y-ffynnon quarry to four, two of which have been named by Bristol Masters students.”

‘A new crurotarsan archosaur from the Late Triassic of South Wales’ by E. Patrick, D. Whiteside and M. Benton in Journal of Vertebrate Paleontology