Women and equality: what can be achieved in the next 100 years? Join Shami Chakrabarti and expert panel for interactive debate 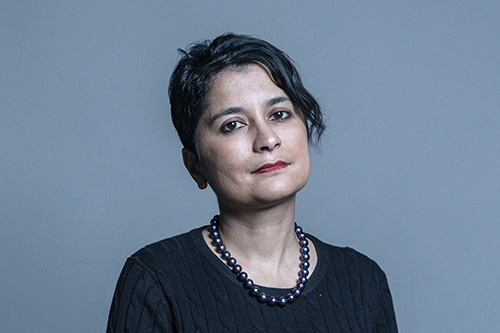 What can women achieve in the next 100 years? This question and more will be discussed at a special event being held by the University of Bristol to mark 100 years since women won the right to vote and stand for election.

What can women achieve in the next 100 years? This question and more will be discussed at a special event being held by the University of Bristol to mark 100 years since women won the right to vote and stand for election.

Baroness Shami Chakrabarti, a Labour Party politician and member of the House of Lords, will join an expert panel of activists and historians in the Wills Memorial Building on 22 November.

The event, entitled 'Women and equality: the next 100 years', will look to the future of gender equality by asking what key challenges need to be overcome and how.

The Wills Memorial Building will be transformed for what promises to be an immersive and interactive evening, with smartphone voting to involve the audience in the debate.

The event is the centrepiece of the University’s Vote 100 campaign, which has been run as part of local celebrations led by Bristol Women's Voice throughout 2018 to explore Bristol’s history as a city of change-makers and consider how it can continue to fight for equality in the future.

This year is significant as it marks 100 years since the first women won the vote and were legally permitted to stand for election. The Parliament (Qualification of Women) Act was passed on 21 November 1918, allowing women to stand for Parliament and Nancy Astor became the first woman MP the following year.

Although much has been achieved - 32 per cent of MPs in the House of Commons are female - and women's lives have been transformed since history was made in 1918, there's still a long way to go in politics and beyond. For example, there are more people called David and Steve heading up FTSE 100 companies than there are women and the gender pay gap continues to hit the headlines.

Baroness Chakrabarti, who is currently Shadow Attorney General and was previously the Director of Liberty, will be joined on the panel by the University of Bristol's Pro Vice-Chancellor for Education Professor Judith Squires, Sally Paterson, who’s currently Liberation and Access officer at Bristol Students' Union, and history academic Dr Sumita Mukherjee, who is an expert on global female suffrage. Penny Gane, Chair of Bristol Women's Voice, will introduce the evening.

A special series of blogs will discuss some of the issues around equality over the next 10 weeks. Join the conversation on social media using the #BristolUniWomen hashtag and suggest which topics you'd like to see discussed.

The Vote 100 campaign, part of a £5 million centenary fund created by the government, commemorates 100 years since Parliament passed a law which allowed the first women, and all men, to vote for the first time. Bristol Women's Voice, together with the University of Bristol and partners across the city, has been celebrating Bristol's history as a city of change-makers and considering how it can continue to fight for equality in the future through an exciting series of events, including a lantern parade down Park Street in February which attracted hundreds of people.