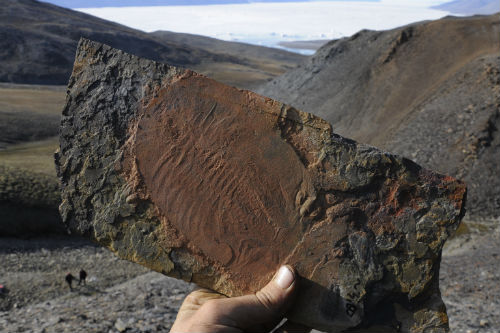 A fossil trilobite from the Cambrian Sirius Passet fossil Lagerstätte of North Greenland. Trilobites are one of the earliest groups of animals to appear in the fossil record. Jakob Vinther, University of Bristol. 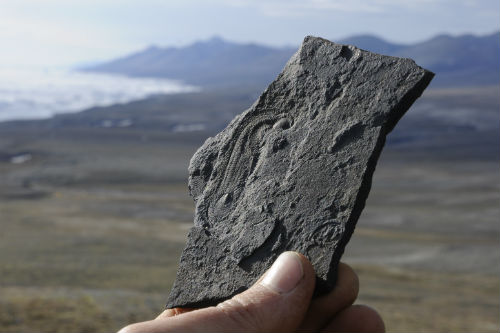 Fossil Halkieria evangelista from the Cambrian Sirius Passet fossil Lagerstätte of North Greenland. The affinity of halkieriids has been much debated, showing similarities to molluscs, brachiopods and annelids. It has been interpreted to represent a distinct Cambrian animal body plan but it is more conventionally interpreted as a primitive mollusc. Jakob Vinther, University of Bristol. 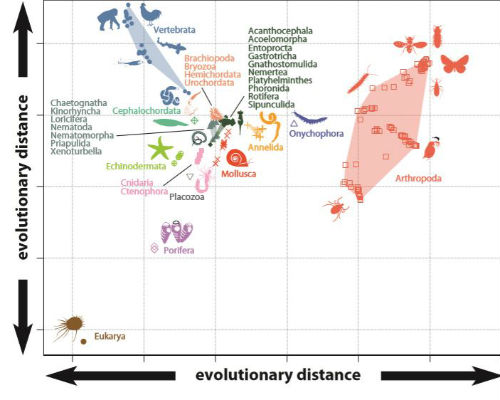 This image is based on the presence and absence of anatomical features, like jointed legs and compound eyes, neurons and boney skulls. Considering all of these features, animals that are similar group together, far away from animals that are dissimilar. Most of this ‘design space’ is unoccupied, in part because of extinction of ancient ancestors that are unrepresented, in part because animals have only been around for half a billion years and that is not enough time to explore all possible designs, but most of the design space is unoccupied because those designs are impossible. University of Bristol

A new study by an international team of researchers, led by scientists from the University of Bristol, has revealed the origins and evolution of animal body plans.

Animals evolved from unicellular ancestors, diversifying into thirty or forty distinct anatomical designs. When and how these designs emerged has been the focus of debate, both on the speed of evolutionary change, and the mechanisms by which fundamental evolutionary change occurs.

Did animal body plans emerge over eons of gradual evolutionary change, as Darwin suggested, or did these designs emerge in an explosive diversification episode during the Cambrian Period, about half a billion years ago?

The research team tackled this question by exhaustively compiling the presence and absence of thousands of features from all living animal groups.

Professor Philip Donoghue, from the University of Bristol’s School of Earth Sciences, said: “This allowed us to create a ‘shape space’ for animal body plans, quantifying their similarities and differences.

“Our results show that fundamental evolutionary change was not limited to an early burst of evolutionary experimentation. Animal designs have continued to evolve to the present day – not gradually as Darwin predicted – but in fits and starts, episodically through their evolutionary history.”

Co-author Bradley Deline, from the University of West Georgia (USA), added: “Our results are important in that they highlight the patterns and pathways in which animal body plans evolved.

“Moreover, major expansions in animal form following the Cambrian aligns with other major ecological transitions, such as the exploration of land.

“Many of the animals we are familiar with today are objectively bizarre compared with the Cambrian weird wonders. Frankly, butterflies and birds are stranger than anything swimming in the ancient sea.”

Co-authors James Clark from Bristol’s School of Earth Sciences and Dr Mark Puttick from the University of Bath’s Department of Biology, worked on trying to fit fossil species into the study.

Dr Puttick said: “One of the problems we had is that our study is mostly based on living species and we needed to include fossils. We solved the problem through a combination of analyzing the fossils and using computer models of evolution.”

James Clark added: “The fossils plot intermediate of their living relatives in shape space. This means that the distinctiveness of living groups is a consequence of the extinction of their evolutionary intermediates. Therefore, animals appear different because of their history rather than unpreserved jumps in anatomy.”

Co-author Jenny Greenwood, also from the University of Bristol’s School of Earth Sciences, wanted to dig deeper. She wanted to work out which of the many proposed genetic mechanisms drove the evolution of animal body plans.

Jenny said: “We did this by collecting data on the different genomes, proteins, and regulatory genes, that living animal groups possess. The differences in anatomical designs correlate with regulatory gene sets, but not the type or diversity of proteins. This indicates that it is the evolution of genetic regulation of embryology that precipitated the evolution of animal biodiversity.”

This research was funded through the Biosphere Evolution, Transitions and Resilience (BETR) programme, which is co-funded by the Natural Environment Research Council (NERC) and Natural Science Foundation of China (NSFC).