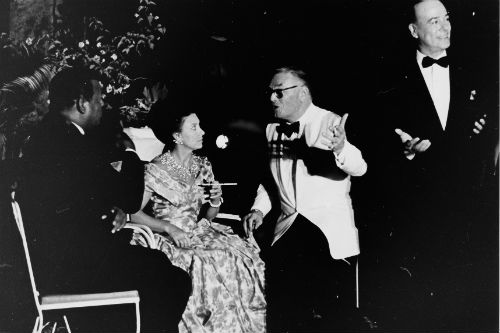 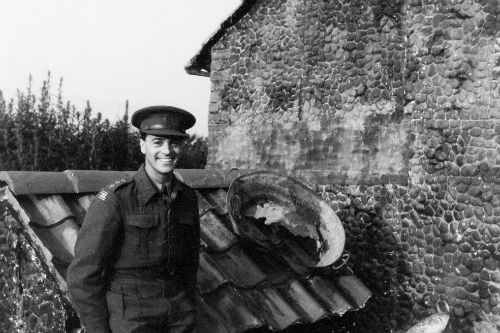 Two new exhibitions open in Bristol next week celebrating the romance and imagination of one of the 20th century’s brightest theatrical stars, Oliver Messel.

The exhibitions encompass the magical worlds of theatre, ballet, opera and film as well as a host of artistic practice from portraiture to architecture, to textiles and interior design, featuring costumes, designs, artwork, letters, photography and more.

In 1966 he moved to Barbados where he embarked on a project to redesign and rebuild a small dilapidated house, applying his theatrical design skills to great effect. This was so successful that over the next 12 years, he designed over 35 homes on the islands of Barbados and Mustique, including a residence owned by Princess Margaret.

Drawing on the richness of both the archive and Messel’s life and work, the exhibitions introduce visitors to Messel’s family and friends, featuring intimate photographs that capture the hallowed youth of a myriad of characters that populated Oliver’s world such as Cecil Beaton, Noel Coward and Syrie Maugham.

Stories are also shared through original correspondence including his first entrée to the theatre with a handwritten request from Serge Diaghilev, impresario of the Ballets Russes, and congratulatory notes from Beaton written from his room at the Waldorf Astoria, New York.

Turning the spotlight on each aspect of his prolific career, different art forms are brought to life including his ingenuity as a costume designer with a headdress fashioned from twisted wire pendants and painted paper worn by Vivien Leigh in George Cukor’s 1946 wartime film of Caesar and Cleopatra.

A highlight of objects on display is an original ballet costume made from delicate mauve and pale blue tulle and appliquéd velveteen leaves, believed to be from the much-lauded ballet of The Sleeping Beauty, in 1946, and an array of accompanying designs and set pieces.

We are also led from the world of stage and film, to sidestep through Messel’s life-long pursuit of modelling and mask-making, with forays into textiles and illustration, with exhibited objectsincluding one of his enchantingly characterful model monkeys, originally used as a promotional prop for Sekers Fabrics.

Covering the latter but no less productive stages of his life are a number of architectural drawings and interior designs, brought to life with colour photographs in faded tropical hues, exploring Messel’s time in Barbados, where he designed homes (inside and out) across the Caribbean.

As well as exploring Messel’s artistic output, Wake Up and Dream also shines a light on more personal aspects of his life, paying tribute to his partner Vagn who organised Messel’s considerably demanding financial affairs, whilst maintaining home and throwing lavish and entertaining of parties for a host of visitors.

The story of Messel’s wartime work as a Camouflage Officer is also told through a fascinating array of photographs, reference material and correspondence, which detail how his theatrical skills were put to use safeguarding munitions stores and concealed vehicles, including pillboxes in North Somerset. Similarly, his ardent campaigning against the colour bar in support of his friend the 36th Kabaka of Buganda, Sir Frederick Mutesa (known as King Freddie), reveal another layer to Messel’s endlessly intriguing life.

As well as telling Messel’s story through an array of original archival items, the exhibition also includes a pilot version of a new work by live artist Tom Marshman, that plays with Messel and Vagn’s love of lavish dining through the interactive audio piece ‘The Caviar Outlook’. Alongside thissits a collaborative installation devised by paper-based artist Diana Beltran Herrera and created by workshop participants, staff and volunteers, evoking Messel’s love of fanciful floral motifs.

Touching upon a wealth of materials and weaving a rich tapestry of stories the exhibitions embrace the huge variety of Messel’s creative endeavours, detailing the magic and mastery of an artist whose all-encompassing vision and imagination can be felt running throughout all aspects of his making, whether creating ethereal fantasies or casting his ideas in paint and stone.

All the items in the Archive either relate to Messel’s time in Barbados, where he moved in 1966, or were taken to the island upon setting up home at Maddox, where he lived with his partner Vagn Riis- Hansen. On Messel’s death in 1978, the contents of his house and studio were left to his nephew Thomas Messel who retained custody of these items until they were sold to the University of Bristol Theatre Collection in 2015.

The Archive has been catalogued as part of a two-year project to both catalogue and conserve this important collection. The purchase of the Archive was made possible due to support from the National Heritage Memorial Fund and the Friends of the National Libraries amongst others. Cataloguing and conservation has been funded by the Heritage Lottery Fund, the Linbury Trust and various individuals.

Oliver Messel (1904-1978) led a dazzling life as one of London’s ‘Bright Young Things’, forging a creative career that encompassed the magical worlds of theatre, ballet, opera and film, as well as including a host of artistic practice from portraiture to architecture, to textiles and interior design. His work was internationally lauded for its beauty, magic and sensitivity, showcasing an innate ability to imagine the minutiae of entire worlds, required to bring even the most fantastical of stories to life.

Messel was born the youngest son of Leonard (a descendent of the L. Messel Co. banking family) and Maud Messel (daughter of Punch cartoonist Linley Sambourne). In 1915 the family moved to Nymans, Leonard’s inherited estate in West Sussex, now known for its much-loved gardens cared for by the National Trust.

Messel’s creative nature was encouraged from childhood, and in 1921 he studied alongside artists such as Rex Whistler at the Slade School of Art, London. Upon leaving the Slade his first exhibition at the Claridge Gallery, London – which showcased his oddly charismatic papier-mâché masks – was seen by Serge Diaghilev, and he was subsequently tasked with producing masks for the 1925 Ballets Russes production of Zéphyre et Flore. Messel’s work also caught the eye of producer and theatrical showman Sir Charles B. Cochran, leading to a glittering career that encompassed the stages of London and New York. He created both costume and set designs, leading to world-renown for his illusory and immaculately conceived theatrical designs.

During World War Two Messel joined the Royal Engineers, working in Somerset and East Anglia, where he turned his painting skills to camouflaging pillboxes and other military stations. However, he was relieved of his duties on several occasions to continue designing for the stage and screen.

In 1953 he briefly entered political life, campaigning on behalf of his friend, the 36th Kabaka of Buganda, Sir Frederick Mutesa (known as King Freddie), who was deposed by the British government as head of state of Buganda (a sub-national kingdom now subsumed within Uganda). Following the Kabaka’s treatment whilst staying in London, Messel was also vocal in publicising his opposition to the colour bar in Britain.

Much has also been made about Messel’s friendships with Cecil Beaton, Noel Coward et al, and with emerging stars, including Vivien Leigh whom he worked with on numerous occasions. Their friendship extended to Hollywood, where he designed major films including George Cukor’s Romeo and Juliet (1936), Gabriel Pascal’s Caesar and Cleopatra (1946) which starred Leigh, Claude Rains and Stewart Granger and Suddenly Last Summer (1959) with Katharine Hepburn, Elizabeth Taylor and Montgomery Clift.

Ever the creative, in addition to his work in stage and film, over the years he also turned his hand to a variety of creative endeavours such as designing decorations for the Royal Box at the Royal Opera House and reconceiving an entire suite at the Dorchester Hotel.

In 1966 he strayed from the world of theatre, moving with his life-long partner Vagn Riis-Hansen, a Danish couturier, to Barbados where he turned his artistic talent to redesigning their home, a former plantation named Maddox. The theatrical nature of his design led to further commissions as both architect and interior designer, including reimagining homes for Princess Margaret amongst others. After an illustrious career, Messel died in 1978, and his ashes were buried alongside Vagn’s.