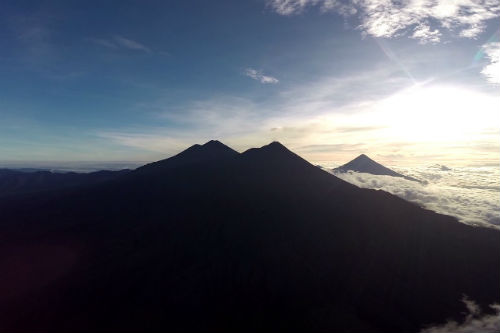 Photo taken from an early morning flight which shows, from left to right, Volcán de Acatenango and Volcán de Fuego (double peak in the left centre of the image), Volcán de Agua (next right, more distant) and Volcán de Pacaya (in the far distance). Universities of Bristol, Birmingham and INSIVUMEH 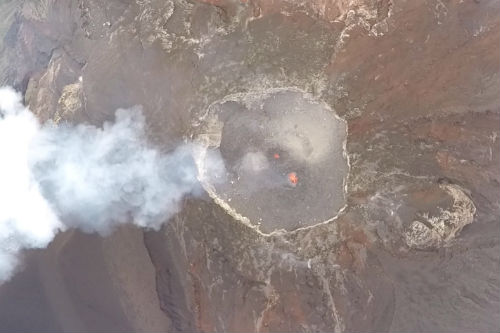 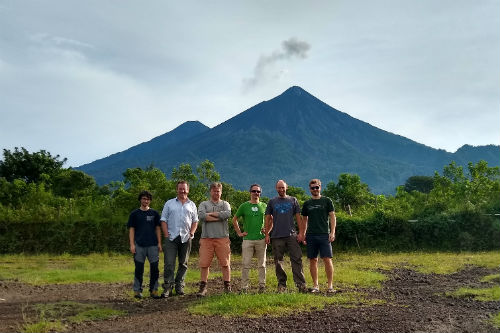 A team of scientists and engineers from the Universities of Bristol and Birmingham have returned from Guatemala where they have been teaching local scientists how to use drones to map the Fuego volcano which violently erupted earlier this year.

The eruption on June 3 included pyroclastic flows (fast-moving currents of hot gas and volcanic material) which left almost no evacuation time and resulted in the deaths of several hundred people, making it Guatemala’s deadliest eruption since 1929.

Supported by the World Bank and the British Embassy in Guatemala, the team have been assisting volcanologists at Instituto Nacional de Sismología, Vulcanología, Meteorología e Hidrología (INSIVUMEH), the Guatemalan government agency responsible for monitoring volcanoes.

Guatemala has limited resources to monitor its active volcanoes and is reliant on overseas support and collaboration.

The local scientists took part in a four-day workshop. They were trained in safe flight protocols, data acquisition and image processing using quadcopters and 3D modelling software supplied by Agisoft.

In conjunction with this work, and integrating with the Guatemalan air traffic control (DGAC), the team also flew larger, fixed-wing drones over the summit of Fuego volcano, at a University of Bristol record altitude of 14,500ft above sea level.

They imaged the summit and were able to predict when and where the next paroxysmal eruption would occur with considerable accuracy.

Chief engineer Dr Thomas Richardson, from the University of Bristol’s Department of Aerospace Engineering, said: “Flying drones at this altitude and remotely is a real challenge and it is incredibly rewarding to help colleagues in Guatemala make observations of the crater that would otherwise not be possible.”

Funded by CASCADE, an EPSRC Programme grant, the team will be returning to Guatemala early next year to continue their work – and have plans for placing sensors on the top of Fuego, multi-vehicle operations and night flights.

Dr Matt Watson, from Bristol’s School of Earth Sciences, added: “This is an incredible opportunity to help others in Guatemala, especially after the tragic events of June 3.

“Collaboration between scientists and engineers makes this possible – engineers are capable of realising scientific endeavors; between us we can take new and exciting observations and measurements to assist with understanding and prediction of volcanic risks.”

Dr Rick Thomas, from the University of Birmingham’s School of Geography, Earth and Environmental Science, led the four-day workshop.

He said: “Flying commercial quadcopters is generally very easy, but flying them safely, legally and repeatedly for scientific purposes is more challenging. This workshop shared knowledge and practices developed for repeated safe drone flying to enable the regular production of high quality 3D maps in difficult terrain. By building this capacity within INSUVUMEH we hope their scientists will have an improved capability to assess risks for the benefit of the local population.”

The team would like to thank DGAC (Dirección General de Aeronáutica Civil) for their support and assistance in obtaining flight permissions and INSIVUMEH (Instituto Nacional de Sismología, Vulcanología, Meteorología e Hidrología) for their ongoing support throughout the campaign.

Local Bristol graduate Matt Purvis for his invaluable assistance during the team’s trip and GeoTravel Ltd. Other members of the research team from University of Bristol involved in the trip were Rob Clarke and Ben Schellenberg.

The team also thank the Cabot Institute and its donors for awarding Innovation Funds to support this development. The Cabot Institute drives world-leading research on how we depend on, live with and affect our planet.  It stimulates new thinking and strives for new innovations to meet our social and environmental challenges.   Its communities focus on six crucial areas: global environmental change, food, water, low carbon energy, natural hazards and future cities and communities.  Each community is driven by outstanding academics with government, industry and society partners from across the globe.  Working together, they seek radical and integrated solutions to 21st century challenges.