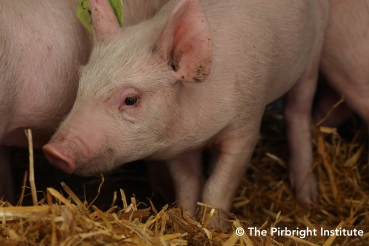 Researchers from The Pirbright Institute, University of Bristol, Cardiff University and University of Oxford have generated tools that allow scientists to understand a vital area of the pig immune system which was previously inaccessible.

The methods developed show how immune cells in pigs, called CD8 (killer) T cells, are recruited in large numbers in the lung after infection with influenza or aerosol vaccination. The tools can also be used to identify virus proteins that are recognised by the immune system, offering the potential to design more effective vaccines. The same methods can be applied to other important pig diseases such as foot-and-mouth disease and African swine fever.

The breakthrough research, described in PLOS Pathogens, used a unique line of Babraham inbred pigs to develop these novel tools for examining T cell responses against flu infection or vaccination. The study brings methods for studying these vital immune cells up to the same high standards that are available for humans and mice.

It will now be possible to track the number and location of T cells in pig blood and tissues during infection, which can help determine the ability of vaccines to induce T cell immunity. The methods also allow researchers to predict which proteins will be recognised by pig T cells, therefore providing valuable information for vaccine improvement or development.

T cells can provide protection against multiple strains of flu, but current vaccines are unable to activate them effectively. The tools in this study were successfully used to show that aerosol delivery of a candidate influenza vaccine is highly efficient in triggering T cell responses in the lung, which are essential for protection against respiratory diseases.

The Babraham pigs played a pivotal role in this research. The team at Bristol have worked with the Babraham pigs for many years and have demonstrated a very high level of genetic similarity between individuals and shown that this could be used in studies of transplantation.

More recently, in a paper published in HLA, Pirbright researchers have shown that Babraham pigs are almost identical in molecules that are vital for initiating T cell immune responses (MHC molecules). This reduces experimental differences between animals making the Babraham pigs a valuable model for studying infectious disease.

The Babraham pigs are now the only example of a large inbred pig breed, which are more closely related physiologically to commercial pigs and indeed humans than other miniature pig models. As a consequence they have great potential to play an important role in studying infectious diseases in pigs, and as a preclinical model for human disease.

Dr Elma Tchilian, head of the Mucosal Immunology group at Pirbright, said: "This study will equip us to track T cells during infection and understand how best to vaccinate animals and humans to achieve powerful protective immune responses. Our tools fill a gap which previously hindered swine immunology research, and can now be used in the study of many diseases."

Professor Andrew Sewell, lead author of the study, explained: "Pigs provide a very good model system for influenza virus infection. They can be infected with both human and bird flu in addition to swine flu and are known to act as important 'mixing vessels' for the creation of pandemic flu strains. The new tools we’ve developed in Cardiff will allow researchers at Pirbright, the Bristol Veterinary School and elsewhere to closely study pig T cell responses to influenza for the first time. The ultimate goal will be to create a vaccine that can be effective against all strains of flu in pigs, birds and humans."

Mick Bailey, Professor of Comparative Immunology in Veterinary Pathology and Infection and Immunity at the Bristol Veterinary School and whose group provided the monoclonal antibodies used to characterise the Babraham T-cells, said: “The Babraham pigs are now a unique resource for studying health and disease in pigs both as globally important agricultural species and as models for human disease.”

Alain Townsend, Professor of Molecular Immunology at the Weatherall Institute Oxford University, added: "The new techniques developed by Andy Sewell and his colleagues showed that our vaccine candidate called S-FLU induced a strong T cell response in the lung of the Babraham pig after aerosol delivery. This is a very helpful extension to the equivalent results we obtained in mice, and provides a unique opportunity for defining the protective role of these cells in a large animal that may model human disease more faithfully."