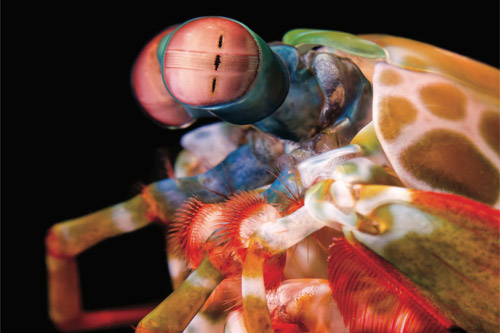 The extraordinary eyes of the Stomatopod Odontodactylus Scyllarus are capable of independent rotation in all three rotational degrees of freedom, leading to complex gaze stabilisation behaviour. Michael Bok

New research, led by biologists from the University of Bristol, has uncovered fresh findings about the most mobile eyes in the animal kingdom - the eyes of the mantis shrimp.

Mantis shrimp vision is extraordinary, both in terms of their colour vision and their ability to see the polarisation of light.

Not only this, but they have extremely mobile eyes that never seem to stop moving. While most animals keep eye movements to a minimum to avoid blur, mantis shrimp apparently go out of their way to move their eyes as much as possible.

Each eye is capable of independent rotation in all three degrees of rotational freedom; pitch (up-down), yaw (side-to-side) and roll (twisting about the eye-stalk).

The Bristol-led team of researchers based at the University’s Ecology of Vision Laboratory, wanted to test the limits of this incredible mobility to discover at what point mantis shrimp have to steady their gaze. Their findings are published today in the journal Proceedings of the Royal Society B.

Like other animals, mantis shrimp do make stabilising side-to-side movements that help keep their vision steady as they move through the world, but the team found that even while stabilising in the horizontal direction, they can’t resist rolling their eyes.

This is completely counter-intuitive; the whole point in stabilising gaze is to keep the appearance of the world around them steady, but by rolling their eyes ‘up’ suddenly becomes ‘sideways’ and the world gets very complicated.

Amazingly, this has no effect on the mantis shrimp - no matter what position they’ve rolled their eyes to, or how quickly they’re rolling, mantis shrimp can still reliably and accurately follow the motion of a pattern that is moving sideways.

Ilse Daly from Bristol’s School of Biological Sciences and lead author of the study, said: “It would be like you tipping your head on its side, then back to normal and all angles in between all while trying to follow the motion of a target.

“Just to make things even more confusing, the left and right eyes can move completely independently of one another, such that one eye could be oriented horizontally, while the other could be twisted completely through 90 degrees to be on its side.”

Following this unexpected discovery, the team tested to see how mantis shrimp would respond if the world started to roll around them.

In humans, such a stimulus would induce severe vertigo, as visitors to certain theme parks may have experienced with rides which challenge people to walk through a tunnel along a solid, fixed gangway while the walls of the tunnel rotate around them - which is nearly impossible to do without falling over.

Ilse Daly added: “We expected that, in response to the world around them apparently rolling, mantis shrimp should roll their eyes to follow their surroundings. They did not.

“The mantis shrimp visual system seems entirely immune from any negative effects of rolling their eyes. Indeed, it appears as though rolling has absolutely no effect on their perception of space at all: up is still up, even when their eyes have rolled completely sideways. This is unprecedented in the animal kingdom.”

The next step is to confirm the existence of such a unique motion detection system and fully explore how it provides mantis shrimps with a clear view of the world regardless of how much or how quickly they’re rolling their eyes. However, a more fundamental question is why mantis shrimp need to roll their eyes in the first place, and this is what the team will seek to answer next.

‘Complex gaze stabilization in mantis shrimp’ by I. Daly, M. How, J. Partridge and N. Roberts in Proceedings of the Royal Society B