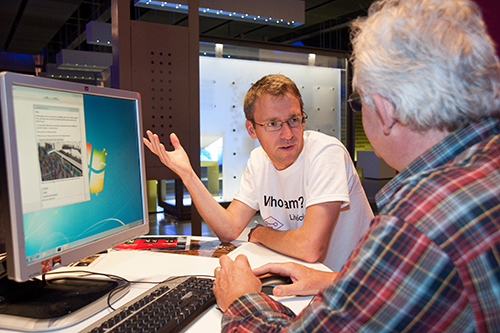 How do you encourage people in the midst of an emergency to stay calm and prioritise their safety over their possessions? University of Bristol researchers have devised a game which they believe could help, by encouraging players to be more risk-aware.

Studies into human behaviour in emergencies have shown that the decisions people make during evacuations, be it the exit they choose or whether they collect their personal belongings, can cause significant delays.

Evacuation drills can prove an effective remedy in improving safety and response, but they have limitations. For instance, testing the evacuation procedure for every large football stadium design before it is built would be prohibitively expensive.

Increasingly, researchers are turning to mathematical or computational models to provide a solution, predicting how crowds of people might move through a building based on assumptions about ordinary human behaviour.

"The trouble is, the assumptions and consequently the models, are not always accurate," said Dr Nikolai Bode, who has devised a series of virtual experiments, packaged as 'the Evac Game', which have been tested out on more than 4,000 people aged seven to 77, encouraging them to act out the way they would respond in an emergency.

"Experiments can be expensive and simulating crowd evacuations could be stressful, meaning people might get hurt. So we needed to find additional approaches for research," added Dr Bode, from Bristol's Department of Engineering Mathematics. "Using virtual environments to conduct experiments offers us a safe and controlled way to see how people behave in emergencies."

Dr Bode has now made the Evac Game publicly available online in the hope that it can improve people's awareness about the importance of their decisions in evacuation scenarios.

The game has three levels, each of which tests how people make decisions based on the behaviour of others, the risks involved, where the exit routes are, how long the queues are to leave a building and perception of time pressure. Each level is directly derived from a scientific experiment.

Participants, or gamers, are presented with a top-down view of a building floorplan that contains one simulated pedestrian who is controlled via mouse clicks, as well as a computer-controlled pedestrian crowd.

"What is unique about this game is that it allows everyone to experience the sorts of decisions we have to make in emergencies,” said Dr Bode. "Players can compare their choices to what people did on average in our experiments. I really hope the game makes people stop and think about their own safety and that of others."

As part of the research project, the different levels of the game were played by over 4,000 people. Some of them were visitors at the London Science Museum, others at public outreach events at the University of Essex where Dr Bode began his research, and some participated as part of a larger study on pedestrian movements in Düsseldorf, Germany.

Amongst other findings, Dr Bode and his team found that when under time pressure, significantly fewer people were willing or able to adjust their decisions on which exit to use, even if this meant they had to wait in a queue for longer.

Dr Bode is now carrying out further research and is considering adapting the game for use by event planners, architects and safety stewards, in the hope that the interactive experience it offers could be useful for designing safe evacuation procedures. He is also exploring whether the game could be incorporated into online safety training courses.

The research was funded by the AXA Research Fund, which supports academic institutions and outstanding researchers committed to improving people’s lives by carrying out cutting-edge and innovative research dealing with global societal challenges related to life and health, data and technology, climate and environment, and economics and insurance.