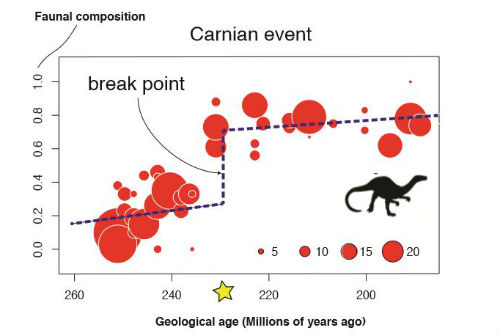 Graph showing the break point analysis. Red circles are the seven Triassic faunas, and the size of the circle represents the total number of specimens. The break point was discovered by the statistical model at 232 million years ago, the time of the Carnian extinction, driven by climate change caused by massive volcanic eruptions. Professor Mike Benton, University of Bristol

During the history of the Earth, there were many mass extinctions, when huge numbers of species died out. They are usually easy to identify because of the sudden extinctions, followed by a gap, and then the recovery of life.

A new mass extinction has been identified during the Triassic period, some 232 million years ago – called the Carnian event. It was less easy to identify because the different sites around the world were hard to date and cross-match. But it was important because it marked the likely trigger for the explosive takeover of the Earth by dinosaurs.

Using a new statistical method, a team from the University of Bristol, has pinpointed the event.

The statistical method is called breakpoint analysis. Counts of species from many samples through the Triassic were compared, and a straight line was fitted to best explain changes in the proportions of dinosaurs to other beasts. To improve the fit of the line, a model was used that allowed for one break, but the position of the break was not specified.

Professor Mike Benton from the University of Bristol’s School of Earth Sciences led the project. He said: “This method is great. We know where we think the change occurred, but we don’t tell the computer.

“We let it crunch the numbers and identify the break point, or the time when one kind of ecosystem ended, and the new one began. In this case, it landed precisely on the point in the Carnian when major environmental changes triggered the extinctions.”

Massimo Bernardi, a co-author of the report, and now curator at MUSE – Science Museum, Trento, Italy, added: “This event had been identified before. This was a time of huge volcanic eruptions off modern Canada, and profound climate changes. The gases from the volcanoes caused long-term shuttling between dry and wet conditions.”

The climate changes had been noted back in 1990, and the dry-wet-dry cycle caused a major change in plants, from succulent wet-loving seed ferns to conifers, which are better adapted to dry conditions.

Cormac Kinsella, another collaborator, and now at the University of Amsterdam, said: “We built a database of 47 faunas from different parts of the world, including 7,773 specimens of reptiles.

“Half way through the Carnian there was a sudden shift in the composition of ecosystems, from comprising a mixed assemblage, to being absolutely dominated by dinosaurs and their relatives.”

The Carnian event was important in heralding the explosion of dinosaurs onto the scene, but it also marked the beginning of many modern groups, such as turtles, crocodiles, lizards, and mammals.

‘The Carnian Pluvial Episode and the origin of dinosaurs’ by M. J. Benton, M. Bernardi, and C. Kinsella, in Journal of the Geological Society