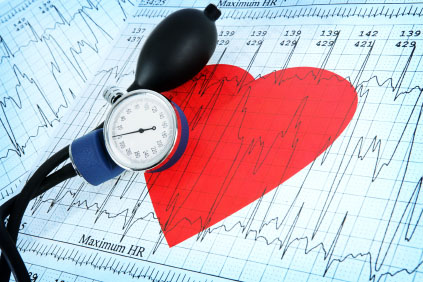 Pregnant women who develop high blood pressure, or have small babies, may have hearts that pump less blood with each beat.

The study, led by Imperial College London and researchers from the Universities of Bristol and Cambridge, also suggest pregnant women who develop high blood pressure (pre-eclampsia), or fetal growth restriction (where a baby's growth slows or stops before birth), may have differences in their blood circulation.

The team tracked the health of over 200 women before and during pregnancy - 15 went on to develop pre-eclampsia or fetal growth restriction (FGR). Pre-eclampsia and FGR are thought to have similar causes, and have previously been linked to abnormalities with the development of the placenta.

However the scientists say the findings suggest women who develop the conditions may have pre-existing cardiovascular differences - which could open avenues for prevention and treatment.

They stressed that the women's heart function and blood circulation were still in the normal range, despite these differences.

The work – published in the journal Hypertension - was funded by Action Medical Research, the National Institute for Health Research Imperial Biomedical Research Centre, and the Imperial College Health Charity.

Dr Christoph Lees, lead author from the Department of Surgery and Cancer at Imperial, said: "Pre-eclampsia and fetal growth restriction can have serious consequences for mother and baby, yet we’re still largely in the dark about their root cause - and how to prevent them. These findings suggest pre-existing issues with the heart and circulation may play a role - and provide an important piece of the jigsaw puzzle."

He added the work may also help explain why previous studies have found women who develop pre-eclampsia and FGR may be at higher risk of heart disease and stroke later in life.

Preeclampsia is a condition that only occurs during pregnancy. It is diagnosed by high blood pressure in the mother, usually after 24 weeks of pregnancy. The condition affects one in 20 pregnancies and although most cases of pre-eclampsia cause no serious problems, in severe cases the condition can endanger the lives of both mother and child. It’s estimated around 1,000 babies die every year because of pre-eclampsia, with most of the deaths due to premature birth.

The scientists originally recruited 494 healthy women to the study, all of whom were hoping to become pregnant within the next year. Out of these women, 218 became pregnant and were available for analysis, and 15 of these pregnancies (almost seven per cent) were affected by pre-eclampsia or reduced fetal growth.

Before becoming pregnant, all women had tests to assess heart function and blood circulation. All of the women were outwardly healthy, with a normal weight and blood pressure. If a woman in the study was diagnosed with pre-eclampsia or FGR during the research, the scientists analysed her test results from before she became pregnant, and in the early stages of her pregnancy. They then compared these with women who had a healthy pregnancy.

The results revealed that although the women’s heart and blood pressure were still in the healthy range, their hearts pumped 16 per cent less [CL1]  blood per minute than the women who had healthy pregnancies, and their blood vessels were 17 per cent more [CL2]  resistant to blood flow. This caused their blood pressure to be slightly higher, but still normal.

He said although pre-eclampsia and fetal growth restriction had previously been linked to abnormalities with the placenta, these results suggest cardiovascular differences may also play a role. “The placenta only develops a few weeks into pregnancy, but we found that heart and circulation differences existed well before the placenta developed.”

Future work will also help establish if screening pregnant women’s heart function would be feasible for identifying the risk of pre-eclampsia.

The team is also investigating other strategies for preventing the condition.

"Although the women in this study weren’t overweight, we know that obesity is associated with the conditions," added Dr Lees "But if improving heart function and circulation could potentially reduce risk of the condition, then healthy living recommendations early in pregnancy may prove beneficial."

The team is now exploring whether making dietary changes, encouraging overweight women to lose weight, and increasing exercise before or during pregnancy can reduce the risk of developing pre-eclampsia and FGR.

Dr Tracy Swinfield from Action Medical Research, the charity that helped support the research, added:  "Research in this area is important, as the earlier we can detect or prevent pregnancy complications, the better. This means women can get help sooner, and babies have the best possible start to life."

Hayley Taggart, a midwife at Queen Charlotte’s and Chelsea Hospital, London, was diagnosed with pre-eclampsia while taking part in the trial at Imperial College London. The trial, called CONCEIVE, tracked women from before they were pregnant, through pregnancy, and then after birth. The aim was to identify whether women had any pre-existing conditions that may increase their risk of pre-eclampsia, and fetal growth restriction, which results in small babies.

"I first suspected something was wrong when I struggled to put my shoes on one morning. I know your feet swell during pregnancy, but my shoes were much tighter than usual. Once I started work, one of my colleagues - a doctor - looked at my face and sent me to get checked straight away. I hadn't realised, but my face was incredibly puffy, along with my hands and legs.

I was 28 weeks pregnant at the time, and went to see the study team, as they were based at the hospital I work in. Swelling is a well-known symptom of pre-eclampsia, and scans suggested the blood pressure was higher than normal in the blood vessels supplying the placenta. This meant I was at high risk of the condition, and I was prescribed extensive medication - eight pills day.

But despite this my blood pressure was still too high, and I was diagnosed with severe pre-eclampsia a few weeks later, and given strong blood pressure drugs through a drip.

Even as a midwife I was still very anxious when told I had pre-eclampsia. You don't know what could be around the corner – and you know the situation can change very quickly.

A scan four weeks later revealed the placenta – which provides the baby with oxygen and nutrients, had stopped working. I cried when I was told this. It was already difficult taking so much medication to keep the condition under control - but to hear your baby is seriously affected is very upsetting, and a lot to take in.

My waters broke the following day, and my daughter Holly was immediately delivered by caesarean section at 33 weeks – nearly two months premature.

Despite weighing just over four pounds, and initially requiring a feeding tube, Holly is now thriving.

She's a completely normal, bouncing two-year-old. She's the same size as her friends, and you wouldn't know she was premature.

I'm so glad my husband and I decided to take part in the trial. Without the study team – and the fantastic team at the hospital, we might not have known the placenta wasn't working – and there would have been a real risk of losing Holly.

And from working in the NHS I know research is so important for developing better treatments, and protecting the health of mums and babies."