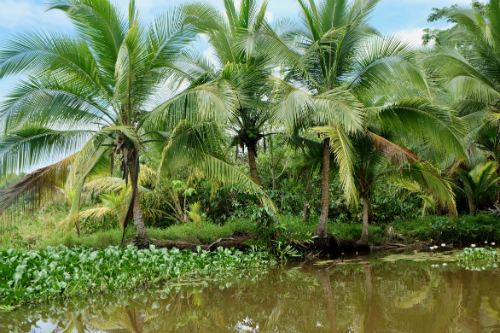 Typical vegetation from the Paleogene period

A new study led by scientists at the University of Bristol has warned that unless we mitigate current levels of carbon dioxide emissions, Western Europe and New Zealand could revert to the hot tropical climate of the early Paleogene period – 56-48 million years ago.

As seen from the ongoing heat wave, the knock-on effects of such extreme warmth include arid land and fires as well as impacts on health and infrastructure.

The early Paleogene is a period of great interest to climate change scientists as carbon dioxide levels (around 1,000 ppmv) are similar to those predicted for the end of this century.

Dr David Naafs from the University of Bristol’s School of Earth Sciences, led the research published today in the journal, Nature Geoscience.

He said: “We know that the early Paleogene was characterised by a greenhouse climate with elevated carbon dioxide levels.

“Most of the existing estimates of temperatures from this period are from the ocean, not the land - what this study attempts to answer is exactly how warm it got on land during this period.”

These results suggest that temperatures similar to those of the current heat wave that is influencing western Europe and other regions would become the new norm by the end of this century if CO2 levels in the atmosphere continue to increase.

Professor Rich Pancost, Co-author and Director of the University of Bristol Cabot Institute, added: “Our work adds to the evidence for a very hot climate under potential end-of-century carbon dioxide levels.

“Importantly, we also study how the Earth system responded to that warmth.  For example, this and other hot time periods were associated with evidence for arid conditions and extreme rainfall events.”

The research team will now turn their attentions to geographical areas in lower-latitudes to see how hot land temperatures were there.

Dr Naafs said: “Did the tropics, for example, become ecological dead zones because temperatures in excess of 40 °C were too high for most form of life to survive?

“Some climate models suggest this, but we currently lack critical data.

“Our results hint at the possibility that the tropics, like the mid-latitudes, were hotter than present, but more work is needed to quantify temperatures from these regions.”

The Cabot Institute carries out fundamental and responsive research on risks and uncertainties in a changing environment.  We drive new research in the interconnected areas of climate change, natural hazards, water and food security, low carbon energy, and future cities. Our research fuses rigorous statistical and numerical modelling with a deep understanding of social, environmental and engineered systems – past, present and future. We seek to engage wider society by listening to, exploring with, and challenging our stakeholders to develop a shared response to 21st Century challenges.  Find out more about our work at www.bristol.ac.uk/cabot

The OGU was founded in 1968 and since then has been at the forefront in the investigation of organic matter in organisms, soils, sediments and rocks.  The group was the first to look for evidence of organic matter in the Apollo 11 lunar rocks, pioneered the field of archaeological chemistry and created numerous new tools for reconstructing Earth’s climate history.  Find out more about our work at http://www.bristol.ac.uk/chemistry/research/ogu/

The Greenhouse Earth System Research grant was awarded by the European Research Council to University of Bristol Cabot Institute scientists Rich Pancost (PI), Dan Lunt, Paul Valdes, Heather Buss, David Naafs and Richard Evershed. The aims of the project are to develop new molecular proxies – especially for environmental processes that remain poorly understood – and apply them to past warm climates.  Simultaneously, the project is adapting the most recent climate modelling advances and applying them to ancient climates.  The project has been informed by the Uncertain World conversations during Bristol’s year as the European Green Capital, facilitating linkages between our understanding of ancient climates and the needs of cities and nations.

Bristol Research Initiative for the Dynamic Global Environment (BRIDGE) is carrying out research centred on understanding the past, present, and future Earth system, with a focus on climate and biogeochemical modelling, and geochemistry.