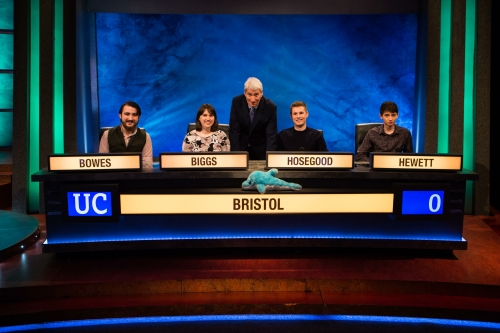 The University of Bristol’s quiz team return to screens next week (Monday 29 January) with University Challenge, in a battle of wits against Newcastle.

Kicking off the new year, the Bristol team go confidently into the first of the quarter final matches, having scored a 205-to-100 victory against Trinity College, Oxford at the end of last year.

The quarter finals are where the competition gets fierce. Both teams have enjoyed two victories to date, and will be fighting to remain in the competition on the show’s 47th series.

Viewers can tune in to BBC2 at 8.30pm to find out if Bristol emerge victorious once again.

The Bristol teammates are:

Team captain Sam Hosegood said: “It's difficult to explain how nerve-racking it is when you're sitting on set with all the lights and cameras on you waiting for the first question to be read. However, despite how stressful the filming can be at times, the whole experience was really good fun.