The early bits of life 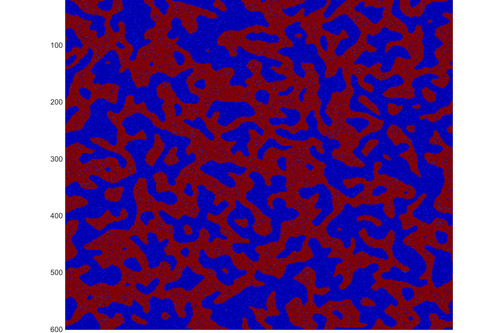 Computer image showing the emergence of a spatially organised information niche. A million random interactions within the population leads to selection of certain automata which become located in different parts of the simulated niche (red and blue regions). University of Bristol

How can life originate before DNA and genes? One possibility is that there are natural processes that lead to the organisation of simple physical objects such as small microcapsules that undergo rudimentary forms of interaction, self-organisation and information processing.

An inter-disciplinary team from the University of Bristol involving Rich Carter, Dr Karoline Wiesner and Professor Stephen Mann from the Bristol Centre for Complexity Sciences, School of Mathematics and School of Chemistry has developed computer simulations that demonstrate how interactions between simple mathematical "objects" (automata) can lead to the self-organisation of robust, cooperative networks of interacting populations capable of mutual reproduction, competition and selective extinction.

Each community represents an information niche, which remains stable under fixed conditions but transforms into a new niche when the environmental conditions are changed.

By determining the information required to generate each niche, the team demonstrate that the population adapts and transitions only where an equal or increased level of information is generated by the system.

The team’s findings may be relevant to understanding how inanimate systems such as chemically communicating protocells can initiate the transition to living matter prior to the onset of contemporary evolutionary and genetic mechanisms.

The new work brings together theoretical and experimental approaches currently being investigated in the Centre for Protolife Research in the School of Chemistry.

Professor Mann, who led the study, said: "Although the new work is far away from life as we know it, the spontaneous emergence of information niches suggests a possible pathway to initiating the first steps in the transition from inanimate to living matter prior to the onset of Darwinian evolution."

‘Emergence and dynamics of self-producing information niches as a step towards pre-evolutionary organization’ by R. Carter, K. Wiesner and S. Mann in Journal of the Royal Society Interface