University of Bristol graduate blasts off to the International Space Station 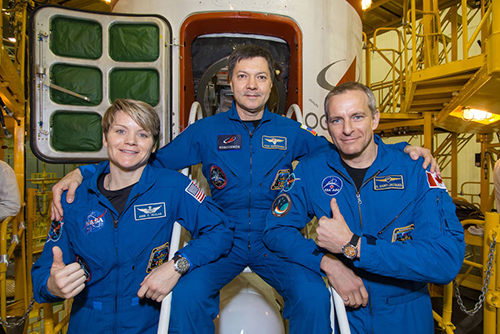 Bristol alumnus and NASA astronaut Anne McClain has donned astronaut boots and launched in the Soyuz MS-11 spacecraft yesterday [3 December], on her first mission to the International Space Station (ISS).

She launched from the Russian-leased Baikonur Cosmodrome in Kazakhstan at 11:31 GMT with two other crew members. The launch was successful, and the Soyuz spacecraft docked with the ISS at 17:23 GMT.

The crew, which also includes David Saint-Jacques of the Canadian Space Agency and Oleg Kononenko of Russian space agency Roscosmos, will man the ISS for six-and-a-half months.

During the mission McClain and crew, will conduct a muscle loss experiment and embark on a spacewalk to probe a hole that caused the ISS to experience a loss of air pressure in August.

McClain was born in Spokane, Washington and came over to the UK on a Marshall scholarship in 2002. She attended the University of Bath before moving to the University of Bristol and graduating with a distinction in her International Relations Masters in 2005.  During her Masters, McClain researched the security burden in developing countries.

After completing her graduate studies, McClain returned to America and soon became a highly distinguished pilot in the USA Armed Forces. In June 2013, McClain was selected as a member of the 21st NASA astronaut class, completing her astronaut candidate training in 2015. This is her first visit to the ISS.

The mission was originally scheduled to launch on December 20, but officials brought it forward to avoid the ISS being left unmanned when its current crew return to earth.

This is the first Soyuz launch since the aborted launch in October, where the astronauts on-board were forced to conduct an emergency landing. According to Roscosmos, the problem was caused by a faulty sensor.

The crew will capture Space X’s Dragon cargo resupply aircraft in the next few days. Cargo will include the first UK-led experiment to head to the ISS. The experiment is using worms to understand muscle loss in space.