Key role for University of Bristol in new supercomputer collaboration 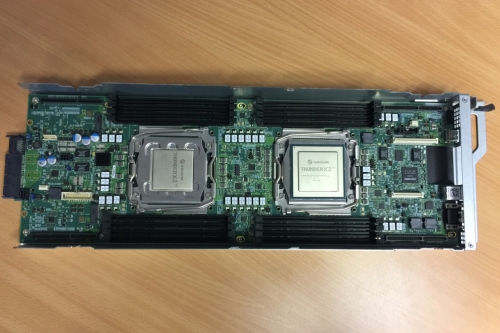 A server with space for two CPUs, known as a dual socket University of Bristol

The University of Bristol is one of the key academic partners in a new collaboration announced by Hewlett Packard Enterprise (HPE) today [Monday 16 April] to accelerate the adoption of supercomputers in the UK.

Led by HPE with Arm, SUSE and the universities of Bristol, Edinburgh and Leicester, the Catalyst UK project will see the development and use of one of the largest Arm-based supercomputing installations world-wide.  It will enable industry and academics to build new applications that use vast amounts of data, as set out in the government’s Industrial Strategy that was launched last year.

The supercomputer installations will be spread across the three universities this summer and the project will run for three years.

At Bristol the new Arm system will complement the existing Isambard GW4 Tier 2 HPC service. Isambard, the world's first production Arm-based supercomputer, is funded by the Engineering and Physical Sciences Research Council (EPSRC) and run jointly by the GW4 universities of Bristol, Bath, Exeter and Cardiff, along with the UK's Met Office. This new project will enable Bristol to expand its focus on Arm-based supercomputing, making it one of the first sites anywhere in the world to run multiple Arm systems from multiple vendors.

Supercomputers increasingly play a crucial role in our digital transformation due their capability of simulating the physical world and generating insights from enormous amounts of data.

Sam Gyimah MP, Science Minister, said: "Today's announcement marks a major step forward in boosting collaboration between the government and business to harness the power of innovation in supercomputing and AI.

"Through our modern Industrial Strategy, AI Grand Challenge and upcoming Sector Deal, the UK will lead the AI and data revolution. Doing so has the potential to increase the UK's competitiveness in emerging industries around the world, grow our economy and create the high value jobs we need to build a Britain fit for the future."

The key focus of the Catalyst UK programme is to investigate and showcase the potential of Arm-based supercomputing. This is one of the current approaches to overcome the limitations of traditional computer architectures and offer a better price-performance ratio for modern workloads and applications. This includes AI, which needs to process large amounts of data and requires extremely high memory bandwidth, and exascale computing, which requires HPC systems to be hundreds of times faster and more efficient than today’s fastest supercomputers, capable of a billion billion calculations per second.

The three supercomputer clusters at EPCC, University of Bristol and University of Leicester will in total run more than 12,000 Arm-based cores, hosted by HPE Apollo 70 HPC systems. The clusters at each university will be largely identical, consisting of 64 HPE Apollo 70 systems, each equipped with two 32 core Cavium ThunderX2 processors, 128GB of memory composed of 16 DDR4 DIMMs with Mellanox InfiniBand interconnects. The operating system is SUSE Linux Enterprise Server for HPC. Each cluster is expected to occupy two computer racks and consume a total of approximately 30KW of power.

Simon McIntosh-Smith, Bristol Professor of High Performance Computing and Head of the HPC Research Group at the University of Bristol, said: “Bristol's early experience with Arm via the EPSRC-funded GW4 Isambard project, and the European FP7-funded Mont-Blanc 2 project, gave us the confidence to explore deploying Arm-based supercomputers for real workloads in a production environment. Bristol has a wealth of experience porting and optimising HPC applications for the Arm architecture in general, and Cavium ThunderX2 processors in particular. Through this new Catalyst UK programme, the HPE Apollo 70 HPC systems will, for the first time, enable us to apply that experience to explore scaling across InfiniBand. We expect these results to be of great interest to our industrial and academic partners."

Mike Vildibill, VP, Advanced Technologies Group at Hewlett Packard Enterprise, based in California, added: "We are currently seeing an insatiable demand for compute performance, as companies seek to gain intelligent and actionable insights from their data. As we embark on the global race towards more powerful and eventually exascale systems, new approaches and technologies are needed to tackle some of the key challenges in achieving these levels of performance, such as rising energy consumption.

"HPE is excited to work with Arm, SUSE, and other key partners to offer the HPC community a fresh alternative for high performance computing which we believe will stimulate the industry to develop increasingly performant and efficient supercomputing solutions.  By investing in this deployment through the Catalyst UK programme, HPE and our partners will drive both digital transformation and sustainable economic growth through new innovation and scientific discovery."