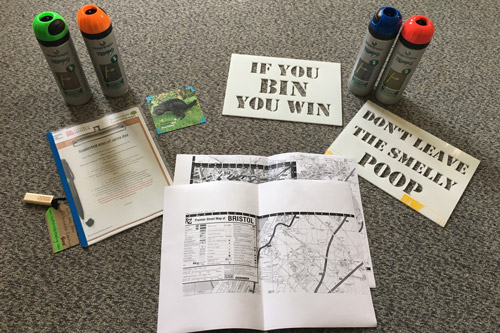 Primary schools and communities across Bristol will be joining forces with the University of Bristol, Bristol City Council and Sustainable Learning on Friday, May 26 to fight back against the scourge of dog fouling on the streets of the city.

The Poo Patrol project was launched in the autumn last year, initially funded by the University's Brigstow Institute. Its mission to educate on the dangers of dog fouling and to encourage dog owners to clear up after their animals.

In Bristol, about four tonnes of dog faeces is produced every day and on average there are 11 to 26 faecal deposits per kilometre of pavement. Evidence has found these are concentrated around schools and in the first 300 metres of paths in parks and nature reserves.

The University's Dr Debbie Watson from the School for Policy Studies has been working with Dr Eric Morgan from the School of Veterinary Sciences in partnership with the Mayor's Clean Streets Campaign and the Sustainable Learning Team to organise the event on May 26 aimed at highlighting the problems caused by dog fouling.

One of the key commitments the Mayor made when he was elected was to work with partners and communities across the city to help clean up our streets, pledging to make them measurably cleaner by 2020. Addressing dog fouling in the city is important to the Mayor and people he speaks to, and is one of the reasons that the Clean Streets Campaign was launched.

The day will get underway with a launch that the Mayor Marvin Rees will attend with a special assembly in Little Mead Primary Academy during which children will learn about the health risks associated with dog poo, particularly the dangers of Toxocara eggs. Similar activities will be replicated by over 25 primary schools across the city.

Only one in 80 faecal samples are found to contain Toxocara eggs but a positive sample contains thousands of eggs. A single egg, if ingested by a person, can cause disease.

The children will participate in a week long project focused on dog fouling which will give them the opportunity to explore the issue through a series of National Curriculum linked lessons including maths and literacy.

Following the assembly, armed with stencils and spray paint, the children – under close supervision – will be out-and-about highlighting where dog poo has been left on the streets around their schools. Some of the slogans they will be spraying (many devised by the children themselves) include "Team Poo Patrol" and "pick it up – you mucky pup".

Over 25 community groups or community representatives will also use stencils and spray to highlight problems in their areas of the city on the same day.

Once the patrol have finished, the location of the fouling will be mapped to help collate city wide data. There will then be re-counts by schools and community groups two weeks later. Bristol Waste Company will then sweep in to remove the offending mess.

Dr Morgan said: "The intention is to engage children and primary schools in creatively highlighting the issue whilst learning about the potential health risks caused by the Toxocara worm found in dog faeces.

"Children will be learning about the life cycle of the worm, collecting and analysing data on the prevalence of dog fouling in their area and designing slogans for stencils to spray messages to dog owners on the streets around their schools."

Dr Watson added: "This is part of an ongoing interdisciplinary project to design community based interventions to highlight the problem of dog fouling and to better understand what works in encouraging responsible dog ownership.

"We're really pleased to be working with schools across the city to educate children on the hidden dangers associated with dog poo. Their response has been absolutely fantastic and we're all looking forward to getting out there on May 26 with our stencils and spray paint at the ready."

Mayor of Bristol, Marvin Rees said: "We want to see everyone taking responsibility for our city and how it looks and this initiative will go some way towards addressing dog fouling in Bristol."

Tracey Morgan, Managing Director, Bristol Waste Company, said: "We are pleased to support Poo Patrol and help highlight the issue of dog fouling in the city.  Our recent survey identified this type of litter as the number one irritant for Bristol residents."

Clare Marshall from Sustainable Learning commented: "By participating in city wide events such as this schools are one step closer to being a green flag Eco-School and are, indeed, flying the flag for positive change both in their local communities and in Bristol as a whole. It's a privilege to work with such impassioned and motivated children; the impact they can have on the city is undeniable."

Jake Howarth-Brown - Acting Head Teacher of Little Mead Primary Academy, one of the schools taking part in the day, said: "Dog poo is a problem in our community and Bristol as a whole. It's not just nasty having dog poo on the bottom of your shoe or on the carpets in school, dog worms can be harmful to the health of children.

"We believe that radical action such as photographing people who do not pick up dog poo, as proposed in Liverpool, is a divisive response. An effective dialogue between dog owners and the community will aim to restore pride and get poo picked up. This is why Little Mead is keen to support the poo patrol spray day."