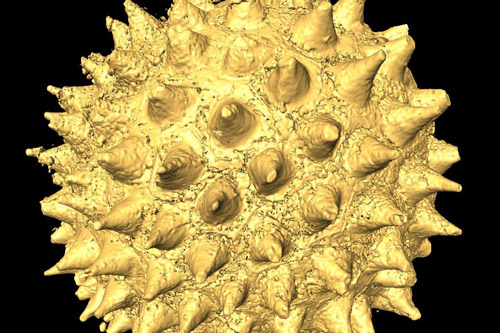 A spiny acritarch from the Doushantuo biota imaged using synchrotron tomography. The affinities of these fossils are unknown John Cunningham, University of Bristol

A team of researchers, led by the University of Bristol, has uncovered that ancient fossils, thought to be some of the world’s earliest examples of animal remains, could in fact belong to other groups such as algae.

The Weng'an Biota is a fossil Konservat-Lagerstätte in South China that is around 600 million-years-old and provides an unparalleled snapshot of marine life during the interval in which molecular clocks estimate that animal groups had evolved.

However, all fossil evidence from this time has met with controversy.

Dr John Cunningham from the University of Bristol's School of Earth Sciences, said: "Dated at around 600 million years old, these rocks preserve an assemblage of microscopic fossils,  perfectly-aged to be candidates for the oldest evidence of animal life.

"These fossils aren’t recognisable as remains of fully grown animals, but some resemble embryos, ranging from single cells to clusters of thousands.

"The preservation is so exquisite, that even sub-cellular structures can be identified, including possible nuclei."

Dr Kelly Vargas, a postdoctoral researcher from the University of Bristol and one of the paper’s co-authors, said: "But with the lack of adult forms that could indicate their identity, paleontologists have to rely on information from cellular anatomy to determine whether these tiny fossils belong to animals or to a different group."

Now scientists have reviewed all the evidence pointing towards an animal identity of the Weng’an fossils.

Their findings have revealed that none of the characteristics previously used to define the fossils as animals are actually unique to animals alone, opening up the possibility for alternative identifications.

Professor Philip Donoghue, another Bristol co-author, added: "Many proponents of animal affinity have argued that the Y-shaped junctions between the cells in the fossils are an important animal character, but this a feature common to many multicellular groups, including algae, that are very distant relatives of animals."

Dr Cunningham added: "It could be that the fossils belong to other groups, such as algae, and these possibilities need to be investigated carefully."

Despite these results, paleontologists are continuing to make new discoveries from the Weng’an Biota, and these are helping to refine our knowledge of evolution during the Ediacaran.

Dr Cunningham concluded: "It might be possible that we’ll find definite animals in the Doushantuo Formation, but it’ll be like finding a needle in a haystack, or should we say an embryo in a really, really big quarry."