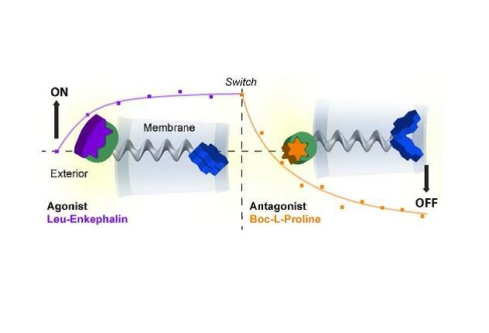 Researchers from the University of Bristol have found a way to mimic the way cells in living organisms ‘talk’ to the world around them by creating a world-first synthetic receptor which can respond to chemical signals just like its natural equivalent.

The breakthrough research, published in the journal Nature Chemistry, paves the way for further advances in biotechnology and in the future could be used in the treatment of medical conditions caused by faulty cellular communication. The research was supported by the European Research Council and the Engineering and Physical Science Research Council (EPSRC).

Professor Jonathan Clayden from the University of Bristol’s School of Chemistry explains: "Cells in living organisms find out what is happening in the world around them by using receptor molecules embedded in their outer membranes. These respond to chemical messages, such as hormones, by changing shape, which sets off a cascade of chemical events inside the cell.

"Working with collaborators in Manchester, we have now designed and synthesised the first artificial mimic of one of these receptors."

The synthetic receptor embeds itself into the membrane of simple cellular structures known as vesicles, and just like its natural equivalent, changes its molecular shape in response to chemical signals.

The researchers were able to get the receptor mimic to respond to the natural hormone Leu-enkephalin (an “agonist”), which in humans is involved in pain relief, and were able to use another chemical messenger (an “antagonist”) to switch this response off again.

"The discovery that artificial molecules can respond to chemical signals in this way raises the possibility that the natural communication pathways used by cells could be added to or bypassed," said Professor Clayden.

"Ultimately, we could see artificial cells being used to produce valuable materials or medicines under the control of receptors in their membranes, or the use of artificial receptors to treat medical conditions caused by faulty cellular communications."