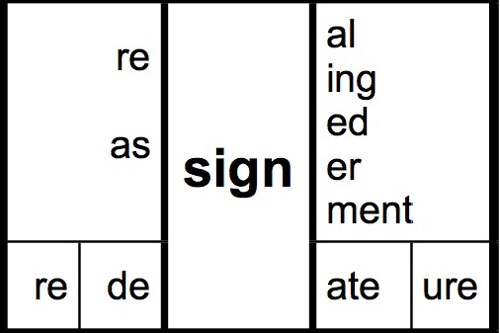 Why is there the letter 'g' in sign? Why not spell the word 'does' duz?

When children are taught to read and write though phonics they have to remember many exceptions, so-called 'sight words'.

In addition, the linguist David Crystal estimated that almost half of all English words have unpredictable spellings from the phonics point of view.

A recent paper published in the journal Educational Psychology by Professor Jeffrey Bowers from the School of Experimental Psychology at the University of Bristol and his brother, Peter Bowers, based at WordWorks Literacy Centre in Ontario, Canada, argues that phonics is a flawed approach because it mistakenly assumes that the primary purpose of letters is to represent sounds.

Jeffrey Bowers said: “Contrary to this common view, a fundamental design feature of English spellings is to represent meaning (through morphology), and spellings are highly consistent once this is appreciated.  Indeed, the linguists Chomsky and Halle called English spellings 'near optimal'.

“Consider again the spelling <sign>.  This spelling is entirely consistent in all morphologically related words: <sign>, <signing>, <design>, <resign>, even when the pronunciations of the words change, such as <signature> and <designate>.

The researchers highlight a number of theoretical reasons why instruction should be designed to teach children the logic of their writing system, what they call Structured Word Inquiry.

They say psychological research shows that memory and learning is best (and most enjoyable) when information is presented in a meaningful format in which children can reason about a subject.

Jeffrey Bowers added: "This characterises structured word inquiry but not phonics.  In addition, children who are struggling with phonics often have difficulty processing the sounds of words.

"Given that phonics selectively focuses on letter-sound correspondences, this approach may be especially difficult for them.

"Structured word inquiry, by contrast, involves teaching children not only about letter-sound correspondences but also the meaningful and logical structure of English spellings.  Accordingly, children struggling with phonics with underlying phonological deficits can bring to bear a broader range of their skills to learning to read and write."

There is now a growing community of schools across the world in which children are being taught the correct how the writing system works rather than phonics and growing research that shows that this approach is promising and is especially helpful for children who are struggling with phonics.

There is currently a large scale Nuffield-funded intervention study, led by academics from the University of Bristol, being carried out in a dozen primary schools in Bristol that is assessing how effective structured word inquiry is for children who are struggling with current phonics instruction.

'Beyond phonics: The case for teaching children the logic of the English spelling system' by J. Bowers and P. Bowers in Educational Psychologist