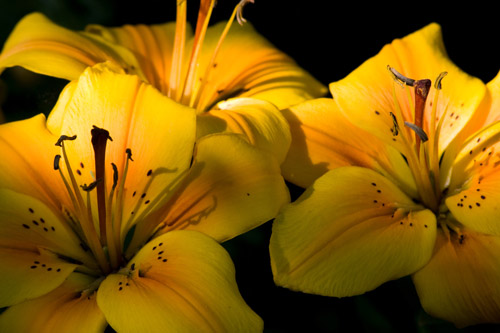 All flowers share a history of genome duplication, which may have contributed to their spectacular diversity James Clark, University of Bristol

Scientists at the University of Bristol have shed new light on the evolution of flowers in research published today in the Royal Society journal Proceedings B.

The evolution of plants has been punctuated by major innovations, none more striking among living plants than the flower.

Flowering plants account for the vast majority of living plant diversity and include all major crops.

The discovery that all flowering plants underwent a doubling of their genome at some point during their evolution has led to speculation that this duplication event triggered the diversification of this spectacular lineage, but the timing of this event has remained difficult to pin down.

Genome duplications provide a second copy of every single gene on which selection can act, potentially leading to new forms and greater diversity.

This process leads to the formation of large families of genes - we can examine the history of duplication in gene families in the genomes of all major groups of plants and then look to the rate of change in their DNA sequences in relation to the evidence presented by the plant fossil record. This provides us with a ‘molecular clock’, with which we can date evolutionary events.

James Clark from the University of Bristol’s School of Earth Sciences, led the research.

He said: “We have found that, based on the signal of these gene families, the timing of this duplication does not support a direct role as a ‘trigger’ for flowering plant evolution.

“Rather, the duplication seems to have occurred at least 50 million years prior to the diversification of flowering plants.

“These results suggest that if the duplication had any impact on flowering plant evolution, then it may have been more of a ‘long fuse’ that may have paved the way for later innovations and diversification, rather than directly causing them.”

Genome duplication undoubtedly had some role to play in the evolution of plants, and these findings highlight the need to carefully consider exactly when each duplication occurred.

Professor Philip Donoghue, also from the University of Bristol’s School of Earth Sciences, co-authored the research.

“Our approach will allow us and other scientists to get to the bottom of the relationship between genome duplication and evolutionary success.”