Beam me up, Scotty – build a portable acoustic tractor beam at home for less than £70 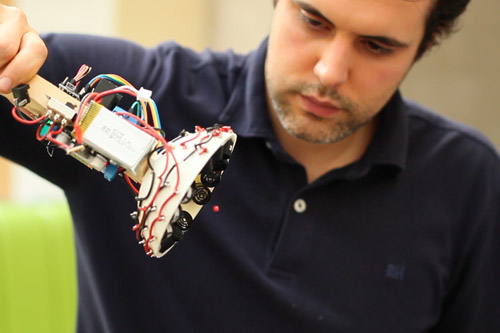 A team of researchers from the University of Bristol have shown it's possible to create a simplified tractor beam using readily available parts with a total cost of less than £70.

Tractor beams are mysterious rays that can grab and attract objects.  The concept has been shown in science-fiction movies such as Star Wars or Star Trek and scientists have developed the theory using lasers.  Recently, sound was used to create a working tractor beam that can move heavier objects made of different materials and that operates both in air or water without damaging the trapped objects.

In the paper, published in Applied Physics Letters (APL), researchers from the Department of Mechanical Engineering, have shown that it is possible to build a simplified tractor beam using only one electrical signal and a passive wave modulator.

The passive wave modulator is a type of acoustic lens that can alter the transmitted or reflected waves. The research team’s passive wave modulator can be made in various different ways. In one example it’s a collection of tubes with different lengths and in another it’s a carefully contoured surface. In both cases it can be 3D printed using an off–the-shelf printer. Using a single waveform a static tractor beam can be created. If two waveforms are used then up and down manipulation of objects can be achieved.

Bruce Drinkwater, Professor of Ultrasonics in the University of Bristol’s Department of Mechanical Engineering, added: "The process is so simple that we have released a YouTube video with instructions that show people how they can build their own acoustic tractor beam step-by-step with components that can be bought on the internet for less than £70."

Previous work on tractor beams using sounds waves has opened up lots of applications for contactless handling. For instance, samples of blood could be levitated for visual inspection without any obstruction; chemical compounds could be merged without being contaminated and kidney stones could be removed from the body without the need for incisions.

However, to generate an acoustic tractor beam a phased array of more than 50 channels was required and each channel needs to be composed of a signal generator and an amplifier. These complex electronics have delayed the spread of acoustic tractor beams into the biophysics or medical applications.