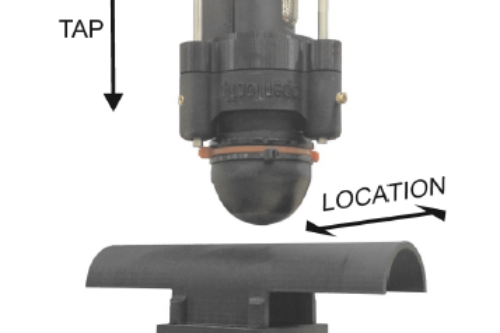 An open-source 3D-printed fingertip that can ‘feel’ in a similar way to the human sense of touch has won Harvard University's international Soft Robotics competition for its contribution to soft robotics research.

Pushing the boundaries of soft robotics, the open-source tactile fingertip, known as TacTip, is a 3D-printed tactile sensor that has been developed by the Tactile Robotics Team from Bristol Robotics Laboratory (BRL).

The fingertip meets the need for a cheap, robust, versatile tactile sensor to give robots an artificial sense of touch. The sensor has a unique design in which a webcam is mounted inside a 3D-printed soft fingertip to track internal pins that act like touch receptors inside our own fingertips, making it cheap to build and highly customisable.

Dr Nathan Lepora, Senior Lecturer in Robotics at the University of Bristol and BRL and leader of the Tactile Robotics Team, said: “An artificial sense of touch is the key for enabling future robots to have human-like dexterity. Applications of artificial touch span from the future robotization of manufacturing, food production and healthcare, to prosthetic hands that restore a sense of touch.”

Benjamin Ward-Cherrier, PhD student at BRL, added: “TacTip is a cheap artificial fingertip that anyone can build and customise with a 3D-printer, opening up the field of tactile robotics to many more researchers.”

Over 80 teams entered Harvard University's 2016 Soft Robotics competition hosted by Soft Robotics Toolkit.  The competition, which is in its second year, aims to develop and showcase novel robots and fundamental research related to soft robotics.

About Bristol Robotics Laboratory (BRL)
Bristol Robotics Laboratory (BRL) is the most comprehensive academic centre for multi-disciplinary robotics research in the UK. It is a collaborative partnership between the University of Bristol and the University of the West of England (UWE Bristol), and home to a vibrant community of over 200 academics, researchers and industry practitioners.

Together, they are world leaders in current thinking on service robotics, intelligent autonomous systems and bio-engineering. The state-of-the-art facilities cover an area of over 3,500 square metres (over 37,000 square feet) and BRL is an internationally recognised Centre of Excellence in Robotics.