University of Bristol rises to 3rd most-targeted university by employers 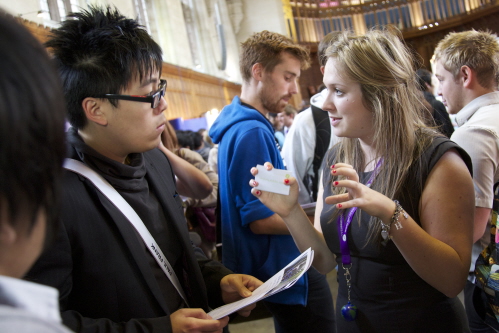 A major new report has revealed that students at the University of Bristol are among the most targeted by Britain’s top 100 employers.

Bristol has been ranked ahead of Oxford and Cambridge at 3rd in the table, which was compiled as part of the Graduate Market in 2017 study. This is up from 4th in 2016.

Among the companies on this list of leading employers are the BBC, Google, Apple, Amazon, the Bank of England, Marks and Spencer and Dyson.

Stuart Johnson, Director of Careers Service at the University of Bristol, said: "Bristol has for a long time been a university heavily targeted by top employers but it is particularly gratifying to be at our highest position in the report since High Fliers began their Graduate Market Review in 2004.

"Bristol attracts some of the best students and produces some of the most employable graduates, something that as an institution and as a careers service we are tremendously proud of."

These institutions have attracted the largest number of top graduate recruiters for campus fairs, recruitment presentations or other local university promotions during 2016-2017.

Other key findings from the 2017 report include:

Jo Johnson, Universities Minister, said: "The fact that our country’s top employers are offering more graduate jobs is a clear sign that the UK’s higher education sector continues to be an excellent option for people looking to secure a rewarding career."

A full copy of the report can be downloaded from the High Fliers website.

About the Careers Service

As a top 3 UK university with leading employers, the University of Bristol Careers Service is the vital link between students at the University of Bristol and their future career. By working with us from day one, students make the most of their time at Bristol and we support them in fulfilling their ambitions: whether that's getting their dream job, experiencing a wide variety of unique and exciting work-related opportunities, or continuing their studies. Our team of specialist staff are here to help students learn more about their chosen field and maximise their employability prospects – helping to introduce them to employers and making them career ready.