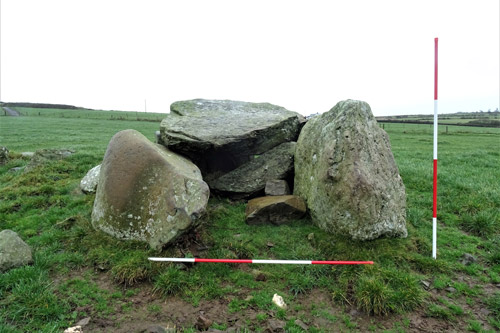 Side view of the south-eastern chamber looking south-west 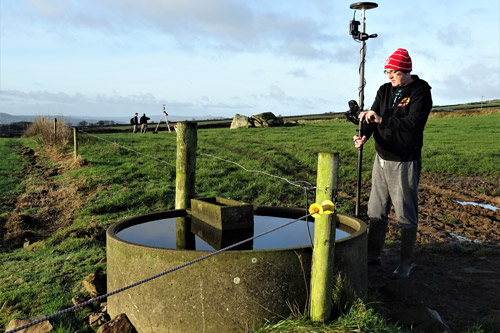 A team of archaeologists, led by a researcher from the University of Bristol, has uncovered the remains of a possible Stonehenge-type prehistoric earthwork monument in a field in Pembrokeshire.

Members of the Welsh Rock art Organisation have been investigating the area around the Neolithic burial chamber known as Trellyffaint – one of a handful of sites in western Britain that has examples of prehistoric rock art.

The site of Trellyffaint dates back at least 6,000 years and has been designated a Scheduled Monument. It is in the care of Welsh heritage agency Cadw.

The site comprises two stone chambers – one of which is relatively intact. Each chamber is set within the remains of an earthen cairn or mound which, due to ploughing regimes over the centuries, have been slowly uncovered.

On the capstone that covers the south-eastern chamber are at least 50 engraved cupmarks (one of the most common forms of later prehistoric engraving in Western Europe), the meaning of which has been long forgotten but probably represented some sort of pictorial message.

Before now, it is thought that the site has never been fully investigated.

Dr George Nash, lead project director from the Department of Archaeology and Anthropology at the University of Bristol and his team, which includes former Bristol students, have conducted a series of non-intrusive surveys in and around the monument.

The fieldwork element of the project started in December 2016 following the acceptance of a project design by Cadw.

This phase included a magnetometry study which covered 80 square metres around the monument and a detailed earthwork survey of the monument itself.

The geophysical survey uncovered a number of anomalies which are considered to be more than likely buried prehistoric features.

Dr Nash said: "To the south and southwest of the stone chamber and appearing to run underneath the southern section of the Trellyffaint mound are two clear circular anomalies.

"It is regarded that this feature may possibly be a henge (otherwise referred to as a hengiform) measuring around 12 metres in diameter.

"It is not clear if this feature possesses an accompanying ditch, however, a circular anomaly extends around this feature, again we are unclear of the relationship (if any) with the smaller circle – only excavation will tell."

Further subsurface features of a probable later prehistoric date occur to the north-east, north and west of the Trellyffaint monument.

Although the precise depth of these features is, for the moment unknown, the team were interested to note that 2-3000-years’ worth of accumulated soil has not created any visible earthworks. This phenomenon though is not uncommon in coastal areas where soil deposition and accumulation can be rapid.

Dr Nash added: "This site, one of only nine Neolithic burial-ritual monuments in Wales with prehistoric rock art - or what I would term aptly 'a visual communication system'."

So far, the results of the geophysical survey have yielded a set of subsurface anomalies that reveal a complex ritualised landscape that includes the precursor to a Stonehenge-type earthwork monument and is similar to the six or more features that were found using similar geo-prospection methods at the nearby Neolithic site, Trefael, in 2012.

Dr Nash said: "The next stage of the project is to apply for Scheduled Monument Consent (SMC) which will include targeted excavation over recognised anomalies identified from the magnetometry survey.

"Before we do this, we will be widening the geophysics area and apply resistivity as well further magnetometry over a wider area."

This fieldwork will take place between April 21 and 23. For details on how to get involved, visit the Welsh Rock Art Organisation’s Facebook page.