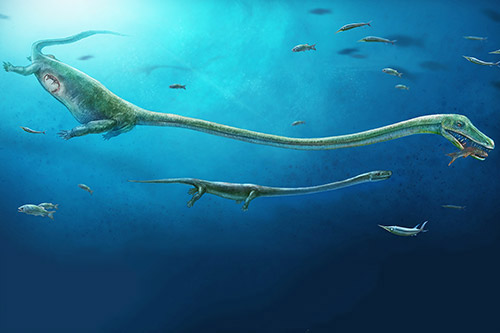 The first ever evidence of live birth in an animal group previously thought to lay eggs exclusively has been discovered by an international team of scientists, including a palaeontologist from the University of Bristol.

The remarkable 250 million-year-old fossil from China shows an embryo inside the mother.

Live birth is well known in mammals, where the mother has a placenta to nourish the developing embryo.

It is also very common among lizards and snakes, where the babies sometimes 'hatch' inside their mother and emerge without a shelled egg.

Until recently, the third major group of living land vertebrates, the crocodiles and birds, part of the wider group Archosauromorpha, only laid eggs.

Egg laying is the primitive state, seen at the base of reptiles, and in their ancestors such as amphibians and fishes.

The new fossil is an unusual, long-necked animal called Dinocephalosaurus, an archosauromorph that flourished in shallow seas of South China in the Middle Triassic.

It was a fish-eater, snaking its long neck from side to side to snatch its prey. The embryo is inside the rib cage of the mother, and it faces forward. Swallowed animals generally face backward because the predator swallows its prey head-first to help it go down its throat. Furthermore, the small reptile inside the mother is an example of the same species.

Lead study author, Professor Jun Liu from Hefei University of Technology in China, said: "We were so excited when we first saw this embryonic specimen several years ago but we were not sure if the embryonic specimen is the last lunch of the mother or its unborn baby.

"Upon further preparation and closer inspection, we realised that something unusual has been discovered.

"Further evolutionary analysis reveals the first case of live birth in such a wide group containing birds, crocodilians, dinosaurs and pterosaurs among others, and pushes back evidence of reproductive biology in the group by 50 million years.

"Information on reproductive biology of archosauromorphs before the Jurassic period was not available until our discovery, despite a history of 260 million years."

Evolutionary analysis shows that this instance of live birth was also associated with genetic sex determination.

Professor Chris Organ, another author from Montana State University, added: "Some reptiles today, such as crocodiles, determine the sex of their offspring by the temperature inside the nest.

"We identified that Dinocephalosaurus, a distant ancestor of crocodiles, determined the sex of its babies genetically, like mammals and birds."

This new specimen from China rewrites our understanding of the evolution of reproductive systems.

Professor Mike Benton, another co-author from the School of Earth Sciences at the University of Bristol, said: "The analysis of the evolutionary position of the new specimens shows there is no fundamental reason why archosauromorphs could not have evolved live birth

"This combination of live birth and genotypic sex determination seems to have been necessary for animals such as Dinocephalosaurus to become aquatic. It’s great to see such an important step forward in our understanding of the evolution of a major group coming from a chance fossil find in a Chinese field."

This piece of work is part of wider collaborations between palaeontologists in China, the United States, the UK and Australia.