Shedding new light on the evolution of the squid 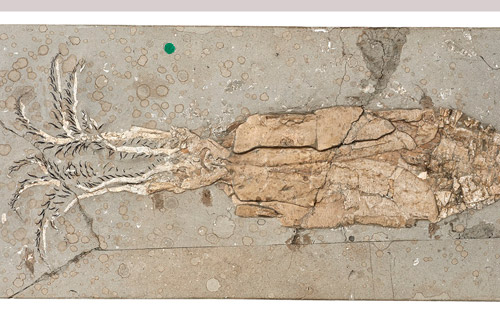 Belemnoteuthis antiquus NHM OR25966, a 166 million year old exceptionally preserved extinct squid-relative found near Bristol (Christian Malford). These ancient cephalopods with their large internal shell were not as fast as their recently evolved relatives, which survived until today’s squid and cuttlefish. Jonathan Jackson and Zoë Hughes, NHMUK

Examining their deep evolutionary past, researchers have been spoiled by their generous fossil record, as demonstrated by drawer after drawer of ammonites and belemnites in every natural history museum shop. But, the mostly shell-less modern cephalopods have been less easy to understand.

Now a new study, led by researchers from the University of Bristol, has found out how these remarkable creatures evolved by comparing their fossil records with the evolutionary history chronicled in their gene sequences to shed light on their origins.

Published today in Proceedings of the Royal Society B, it shows that the cephalopods diversified into the familiar modern octopuses, cuttlefish and squid during a time of great change in the marine world, known as the Mesozoic Marine Revolution, 160 to 100 million years in the past.

Lead author, Al Tanner, a PhD student at the University of Bristol's School of Biological Sciences, is a molecular biologist and bioinformatician at the Bristol Palaeobiology Research Group—a world leading evolutionary research group.

He said: "On land this was the time of the dinosaurs, but beneath the seas, ecologies were changing rapidly. Fish, squid and their predators were locked in evolutionary ‘arms-races’, leading to increasingly speedy and agile predators and prey.

"The cephalopods are now known to have also been caught up in this major transition, evolving to lose the shells of their ancestors and develop as dynamic and uniquely adapted marine animals."

The researchers used a technique called molecular clocks to investigate the timing of when the groups split from each other. Bristol co-author, Professor Davide Pisani, added: "Complex Bayesian models take all sorts of information into account to build a tree of evolutionary time.

"The key element of molecular clocks though is the fact that mutations steadily accumulate in genetic material over time – so by figuring out how many mutations per million years you find, and how it may vary between different groups, we can estimate evolutionary time."

Al Tanner said: "The molecular clock results can be compared to the fossil record. What we see is that while there is some uncertainty in molecular clock estimates, octopuses and squid appear during the Mesozoic Marine Revolution and the two lines of evidence come together to tell the tale of evolution."

Co-author Dr Jakob Vinther said: "By having a reduced internal skeleton compared to their ancient relatives, the modern squids and octopuses could compress their body and more efficiently jet away leaving a baffling cloud of ink with the attacking predator. Before the predator realises what has happened and gains clear view again, the squid is far out of sight."

Al Tanner added: "The research exemplifies why evolutionary biologists are increasingly seeking to understand deep history from the combined study of both living organisms and the geological record. Through this synoptic view, so called molecular palaeontologists are transforming our understanding of how life became so complex and diverse."