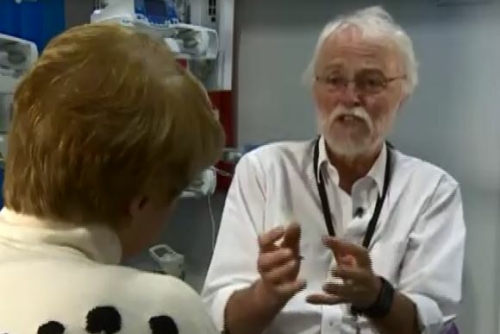 Twenty five years ago, University of Bristol Professor, Peter Fleming, pioneered research which showed lives could be saved if babies were placed on their backs - and not their fronts- to sleep. His ground-breaking research informed the high profile Back-to-Sleep campaign in the early 90s. It is estimated his research has saved the lives of more than 20,000 babies in the UK alone and has changed official advice about safer sleeping for babies the world over.

In this film, made by BBC Points West to mark its 60th anniversary, broadcaster and Back-to-Sleep campaigner, Anne Diamond, talks about how losing her infant son to sudden infant death syndrome (SIDS) led her to discover the pioneering research of Professor Fleming and his colleagues.

Professor Fleming, together with local health visitors and GPs, discovered if babies were placed on their backs - rather than their fronts - to sleep instances of cot death, as it was known then, could be greatly reduced. This research flew in the face of official guidelines about placing babies on their front to sleep and initially attracted widespread criticism from the media and scepticism from some doctors.

Thanks to the courageous efforts of both Professor Fleming and Anne Diamond - just four months after losing her son, Sebastian - the government changed its guidelines and the Back-to-Sleep campaign was launched. It is credited with reducing the number of sudden infant deaths from 2000 in 1991 to 200 today and has been described as the single most effective health campaign ever to have run in this country.

However, for Professor Fleming, 200 is still 200 families too many. A quarter of a century later he is still working tirelessly to establish the causes of SIDS so that in the future no family will have to endure the heartbreak and trauma of losing a child to SIDS.

Professor Fleming's latest research is funded and supported by the Lullaby Trust.