How are antimicrobials used around the world in food-producing animals? 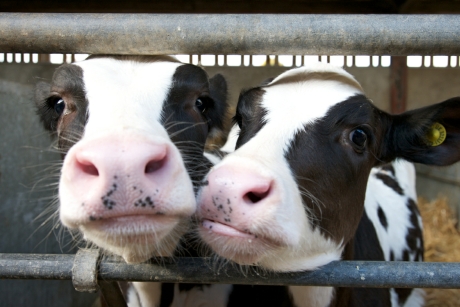 A new study led by academics at the Bristol Veterinary School has reviewed the literature on the use of antimicrobials (AM) in livestock practice together with the views of stakeholders. The study found that although there are some barriers to change, there is a clear awareness of the issue among the livestock sectors and a willingness to modify AM use.

Food-producing animals throughout the world are likely to receive AMs when needed to treat infections. There are concerns, however, that AM use in human and veterinary medicine is causing antimicrobial resistance (AMR) in both humans and animals.

The Rapid Evidence Assessment (REA), led by Professor Henry Buller at the University of Exeter and Dr Kristen Reyher at the University of Bristol, investigated what is currently known about the use of AMs in food-producing animals, the practices and views of the stakeholders involved in the administration of AMs, and the availability and validity of data on AM use in practice.

Forty-eight papers published in peer-reviewed journals between 2000 and 2016 were identified and reviewed. Key drivers of change in AM use in food-producing animals along with barriers to change were identified, indicating the multitude of issues surrounding current knowledge of AM use and attitudes about the reduction of AM use in livestock.

The study identified a difference between and within countries, production types and individual farms which showed the difficulty of the challenge involved in monitoring and regulating AM use in animal agriculture. Many factors that could influence the frequency of AMR in livestock are of concern across all sectors of the livestock industry, including inflexibility in production systems, low capacity for re-investment in farm buildings and high production costs, all of which are barriers to the reduction of AM use.

Dr Kristen Reyher, Senior Lecturer in Farm Animal Science at the Bristol Veterinary School, said: “The REA highlights the potential role not only of farmers and veterinarians but also of other advisors, public pressures and legislation to influence change in the use of AMs in livestock and to improve the system of farming for the benefit of all animals and humanity.”

A number of positive drivers towards reduced AM use were also identified, including new methods of knowledge exchange and learning to improve awareness of responsible AM use, higher levels of on-farm biosecurity, better and wider use of diagnostics and wider use of vaccines. Evidence that farmers recognise and acknowledge the need to reduce antimicrobials was identified, although no evidence that medicines sales by veterinarians drives overuse of AMs was found.

Many factors which could influence the prevalence of AMR in livestock species - including the improper use of AMs in both the pig and cattle sectors, across all global regions - remain a concern. Prophylactic and metaphylactic use of AMs has been identified to historically be common practice across all sectors for which relevant literature was found, although this is changing in many areas of the world.

The study found there was a lack of literature about the use of AMs in poultry production, especially within the EU. It is possible that data regarding AM use in poultry is collected by poultry producers in some countries but these data are not available in the published literature. The researchers suggest that work should be done to combine and publish any existing data or investigate this area of AM use further.

Levels of farmer knowledge about the prudent use of AMs varied between groups, and veterinary input, although respected, was low in some all geographical locations.

The study found that economic concerns and restrictions relating to farm infrastructure or production type could limit farmers’ ability or motivation to alter AM use in their animals. Veterinary advice, public pressures, input from other advisors and moral obligation also influence farmers’ attitudes to AM use. Similarly, veterinary prescribing habits have been shown to be influenced by similar factors to differing degrees, and veterinarians’ confidence in their own knowledge of the AMs they are prescribing also influence prescribing behaviour.

The researchers believe that increasing knowledge of how to use AMs properly as well as raising awareness of AMR and encouraging a reduction in AM use in these sectors is essential, and addressing responsible use across groups could have a greater effect than targeting one group individually.

Paper: ‘Antimicrobial use in food-producing animals: a Rapid Evidence Assessment of stakeholder practices and beliefs’ by Hockenhull et al. in Veterinary Record

The study was supported by the Department for Environment Food & Rural Affairs (Defra) [OD0558].

About antimicrobial resistance (AMR) research
Antimicrobial resistance (AMR) research at the University of Bristol's School of Veterinary Sciences is promoted and facilitated by the AMR Force, initiated and led by Dr Kristen Reyher. We work both in the South West, nationally and internationally, and are interested in decreasing antibiotic use while improving animal health through a plurality of approaches addressing differing styles and attitudes. Our group has been funded by and currently stewards over £3.6 million of funding from Research Councils UK (BBSRC, ESRC, EPSRC, MRC, NERC) along with various industry (AHDB Dairy, MSD Animal Health, Zoetis UK, WD Farmers, Coombe Farm), public (Defra, University of Bristol) and charity funders (Soil Association, The Langford Trust) as well as international bodies (EU H2020, Formas – Sweden).

We are uniquely placed to combine our veterinary focus with close collaborations, including those with social science interests, animal welfare research and policy-making concerning animals, animal welfare and veterinary practice. We perform medicines audits and clinical governance on antibiotics in all Langford Vets clinics and advise for a number of other practices nationally. We are heavily involved in influencing medicines use UK-wide and in national control programmes on farms. We also work closely and have collaborations with the BristolBridge AMR project and with a number of basic and social science researchers at the University of Bristol and the University of Exeter.