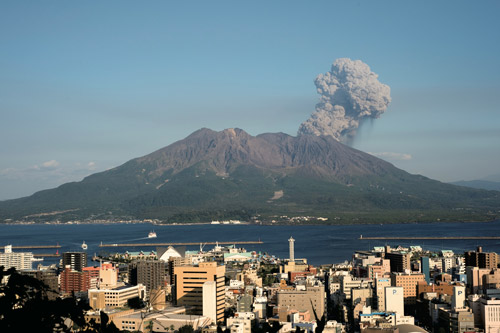 A research team led by the University of Bristol has found magma build-up beneath Japan's Aira caldera and Sakurajima volcano may indicate a growing threat to Kagoshima city and its 600,000 inhabitants.

The team was headed by Drs James Hickey and Joachim Gottsmann from the Volcanology Research Group at the School of Earth Sciences.

They studied surface deformation in and around the caldera and volcano to characterise the magma supply conditions, and how they can be used for eruption forecasting and hazard assessment.

The study, in collaboration with the Sakurajima Volcano Research Centre, is published today in Scientific Reports.

Aira caldera is a large, submerged crater in the southern part of Kyushu, Japan, caused by the violent explosion and subsequent collapse of a voluminous magma reservoir. The re-growth of this magma storage zone has been feeding Sakurajima volcano, which is located on the southern rim of the caldera.

Sakurajima is one of Japan's most active volcanoes with small, localised eruptions nearly every day, but the history of the volcano is even more ferocious. In 1914, a large explosive eruption killed 58 people and caused widespread flooding in the adjacent city of Kagoshima as the ground subsided due to the withdrawal of magma from the subsurface.

Continued measurements of the ground movement since that eruption show that the whole area is uplifting. By combining recent GPS deformation measurements with other geophysical data and advanced 3D computer models, Dr Hickey and his co-authors were able to reconstruct the magma plumbing system beneath the caldera.

Their results show that magma is being supplied to the system at a faster rate than it is being erupted from Sakurajima volcano. This causes the ground to swell as the magma reservoir expands below the surface. A volume of 14 million m3 is supplied each year, equal to roughly 3.5 times the volume of Wembley stadium.

The excessive build-up of magma may indicate there is growing potential for a larger eruption.

In particular, the deadly 1914 eruption was approximately 1.5 km3 in volume. From this time it would take roughly 130 years to save up enough magma for another eruption of a similar size. The authors were additionally able to place numerical constraints on the timing, mechanism and location of magma supply.

Lead-author Dr James Hickey (now at the University of Exeter) said: "These results were made possible by combining data from various monitoring methods and applying them to new numerical modelling techniques, moving away from older modelling methods that have been in use since the 1950s.

"This approach could help to improve eruption forecasting and hazard assessment at volcanoes worldwide. Sakurajima volcano was a particularly great place to develop this approach as there is genuine concern over the state of the volcano, which was particularly evident during a crisis in August 2015."

He added: "By identifying a timeframe over which we may see an increase in the level of activity at the volcano our colleagues at the Sakurajima Volcano Research Centre can plan accordingly. The numerical constraints we were able to put on the magma supply conditions can also be used to assist with probabilistic and quantitative eruption forecasting."

Co-author Dr Joachim Gottsmann said: "A thorough understanding of the rate and volume of magma supply and accumulation, and their thermomechanical controls, is essential for continued monitoring and eruption forecasting at Sakurajima volcano, and volcanoes worldwide."

Dr Haruhisa Nakamichi, Associate Professor at the Disaster Prevention Research Institute, Kyoto University, and co-author, said: "It is already passed by 100 years since the 1914 eruption, less than 30 years is left until a next expected big eruption, Kagoshima city office has prepared new evacuation plans from Sakurajima, after experiences of evacuation of the crisis in August 2015."

This study was funded by the European Commission VUELCO project, the University of Bristol International Strategic Fund, and the Ministry of Education, Culture, Sports, Science and Technology (MEXT) of Japan.