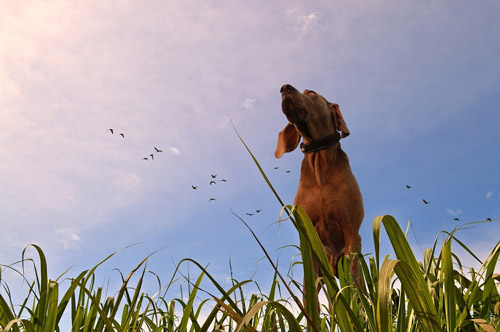 Almost one third of dogs (31 percent) checked at random during a visit to a vet were found to be carrying a tick.

That's the result of the Big Tick project – the largest ever study of ticks in dogs in the UK.

The Big Tick Project was carried out by the University of Bristol during 2015 and found a wide geographical spread of ticks right across the UK with the highest risk areas in the South West, Scotland and East Anglia.

The study also found that dogs were at risk of ticks regardless of whether they were urban or rural.

Ticks carry a range of diseases. These diseases include Lyme disease and potentially fatal canine babesiosis, a disease found in the UK earlier this year for the first time in dogs that had not travelled abroad.

Climate change, an increase in hosts carrying ticks and changes to environmental management are all thought to be factors affecting increased tick numbers and activity.

In the study, 56 dogs had travelled outside the UK in the previous two weeks, 43 of which were infested by one of three species of tick (76 percent). In some dogs that had travelled abroad, the Brown Dog Tick was found which can cause infestations within the home.

Professor Richard Wall from the School of Biological Sciences at the University of Bristol, leads the Big Tick Project team.

He said: "The work that we have carried out shows that ticks are very widely dispersed and illustrates that we appear to have had an increase in tick numbers across the country.

"What we are most concerned about is the diseases that they carry. In this country, we have relatively low rates of the prevalence of these pathogens at the moment and, in contrast, in continental Europe they have much higher rates of disease. As there seems to be a rise in tick numbers, we need to be concerned and be aware of the potential for increasing problems."

The results are being released to mark the start of Tick Awareness Month a campaign led by Chris Packham and veterinary practices across the UK to raise awareness of the risk to our dogs from ticks.

During Tick Awareness Month, Chris is encouraging dog owners to visit their vet for information on tick control for their pets and to find out how to check their pets for ticks and remove ticks correctly.

The interactive map searchable by postcode shows the distribution of ticks across the country including higher risk areas: http://www.bigtickproject.co.uk/about/uk-tick-threat-map/

The Big Tick Project was launched by the University of Bristol in conjunction with MSD Animal Health in response to what appears to be a rapidly growing problem in the UK of tick-borne disease with potential for health and economic impacts.

Launched in April 2015 by TV presenter and naturalist Chris Packham, participating veterinary practices were asked to examine dogs in their practice for ticks each week using a standard grooming protocol and complete a questionnaire relating to the clinical history of each dog.

Tick samples were then sent to the University of Bristol, where they were identified to species, life-cycle stage, sex, mapped by location of origin and examined for the presence of pathogens. All ticks of the same species found on any one dog have been pooled for analysis.