For ants, 'elite' individuals are not always so effective 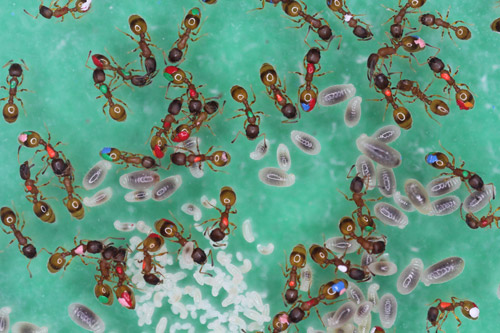 We all know that social insects, such as ants, often work together to achieve effective responses to environmental challenges.

However, research by the University of Bristol, published in the Journal of Experimental Biology, has now uncovered that the contributions of different individuals within such groups vary.

In many cases, certain 'keystone' individuals conduct much more work than others, and are assumed to be disproportionately important to the collective response.

Researchers examined this phenomena in 'tandem running' during colony emigrations in the ant species Temnothorax albipennis.

Tandem running allows ants to lead their nest mates to a new home before the colony decides to emigrate, with more tandem runs being conducted the further away that new home is.

Thomas O'Shea-Wheller from the School of Biological Sciences, said: "In our experiments, we individually paint-marked all of the ants in colonies, allowing us to determine the exact contribution that each worker made to the tandem running process.

"However, surprisingly, these active individuals were in fact no more successful at completing the task, and so their overall contribution was questionable.

"Instead, it seemed that when more tandem runs were needed, colonies relied on greater numbers of ants being involved in the process.

"Hence, our study shows that in some cases, even when apparently 'key' individuals exist within groups of animals, their relative contribution to task performance may be far from decisive."