Protocells on the hunt 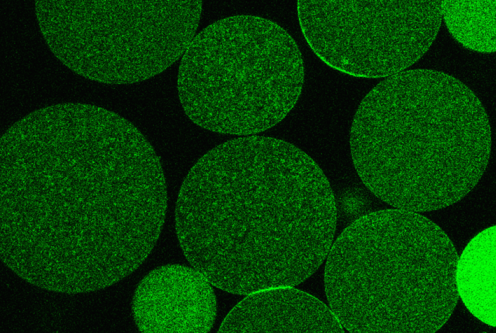 Researchers at the University of Bristol have designed a synthetic community of artificial cells that collectively displays a simple form of predatory behaviour.

Protocells are artificial cell-like entities that could be used to clean up pollutants, store and release drugs, monitor chemical reactions, and serve as models for the origin of life. Previously, most studies on synthetic protocells have focused on the chemical assembly of individual protocells, but the idea that different types of protocells could be brought together into a community of life-like small objects has not been investigated in any detail.

In a new study published today in Nature Chemistry, Professor Stephen Mann from Bristol’s School of Chemistry, together with colleagues Yan Qiao, Mei Li and Richard Booth in the Bristol Centre for Protolife Research have addressed this challenge by designing two different types of protocells, that when mixed together, produce a community that exhibits a simple form of predatory behaviour.

One of the protocell populations is in the form of small liquid micro-droplets that contain a protease enzyme that breaks up protein molecules. This is the predator or killer protocell. The other member of the community is a larger protocell called a “proteinosome” that consists of a protein-polymer membrane and has molecules such as different types of DNA trapped inside it.

By engineering opposite electrical charges on the different types of protocell, the team was able to show that mixing the two populations resulted in their chemical attachment, and because the protease enzyme in the liquid micro-droplets was now in contact with the membrane of the proteinosome capsules, the latter were completely destroyed within 60 minutes. But if no protease was present inside the droplets then the two types of protocells remained intact within the community.

Professor Stephen Mann said: "This work could open up a new horizon in protocell research because rather than focusing on individual functions it offers an approach to complex biomimetic behaviours arising from collective properties, population dynamics and emergent interactions. Although the research is just beginning, our overall vision is to develop new proto-biological technologies based on synthetic protocell communities and their extended networking into protocell ecosystems.”