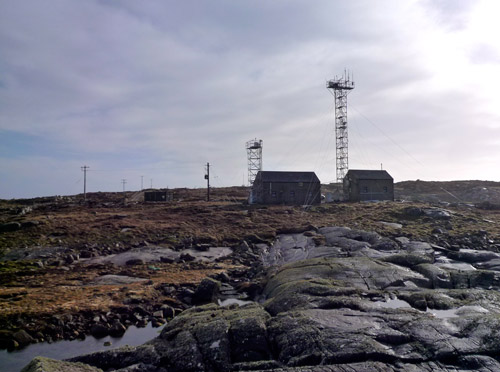 The Mace Head observatory on the West Coast of Ireland, where the atmospheric measurements were made University of Bristol

Using atmospheric data, academics from the University of Bristol have suggested that emissions of HFC-134a, a potent greenhouse gas, may have been dramatically overestimated in UK reports.

This has now prompted the Government to commission a new emissions inventory for this gas.

Hydrofluorocarbons (HFCs), per tonne of emissions, make a contribution to climate change that is many thousands of times that of CO2.

The most abundant of these, HFC-134a, was originally introduced as a replacement for ozone-depleting CFCs, and is used predominately in car air conditioning units.

Because of its contribution to climate change, the UK must report emissions of this gas as part of its commitment to the United Nations.

These national inventory reports are constructed using, so called, "bottom-up" methodologies (a type of accountancy method); in each sector, the total number of estimated sources are multiplied by an emissions factor to obtain the total amount released to the atmosphere.

However, these estimates are thought to be subject of large uncertainties.

Dan Say, a PhD student at the University of Bristol's Atmospheric Chemistry Research Group (ACRG), wanted to examine whether the numbers that the UK government had been reporting for HFC-134a matched up with what we see in the atmosphere.

He said: "We often find that, when we compare bottom-up reported emissions with atmospheric data, the two don't match up.

"Around the UK, we are very fortunate to have long-running, high-precision measurements that can help us determine whether these reported emissions are accurate."

The authors used over 20 years of data from the University of Bristol's Mace Head observatory on the west coast of Ireland, to examine concentrations of HFC-134a in the air, when it had travelled across the UK. Their findings were published recently in Environmental Science and Technology.

Dr Alistair Manning, a co-author from the Met Office, said: "Measurements of gas concentration give us an indirect way of monitoring emissions.

"We need to use a model that describes how the air mixes and moves from the UK to the monitoring station. Then we can use atmospheric measurements to independently evaluate emissions from the top-down."

The study found that the emissions of HFC-134a inferred from the atmospheric data were around half of those reported by the UK Government.

This led the authors to work with the UK Department of Energy and Climate Change to examine the assumptions that had been used in the emissions inventory.

They found that some factors, particularly relating to how regularly drivers refilled their air conditioning systems, could be erroneous.

In light of this work, the Government has commissioned a new emissions inventory for this gas, with the result that the top-down and bottom-up methods now agree more closely.

Professor Simon O’Doherty, also from ACRG, said: "This work shows how valuable atmospheric data can be in evaluating a country’s emissions.

"By working together with the team who compile the Government’s inventory, we have been able to get a more accurate understanding of the UK’s contribution to climate change."

The team are now working to evaluate the UK’s inventory of all the major greenhouse gases.