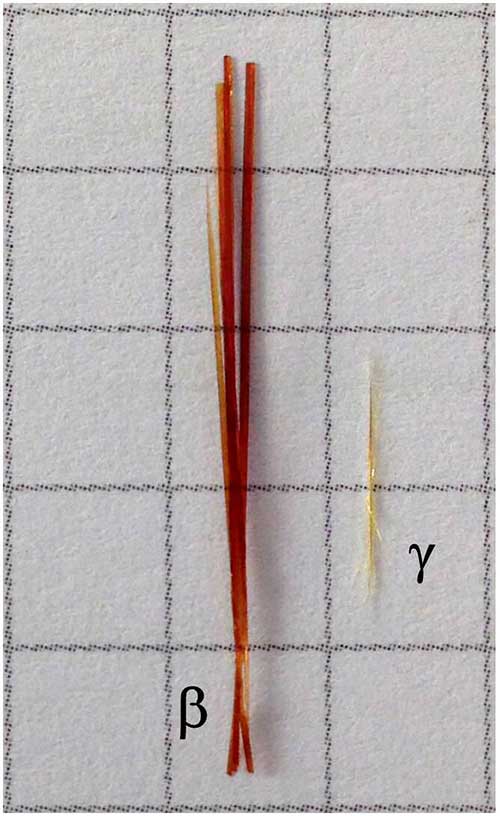 Optical images of the new β-polymorph (orange crystals) and usual γ-polymorph (yellow crystals) of coronene. The squares on the grid are 0.5 cm × 0.5 cm.

A new way to grow crystals has been discovered by researchers at the University of Bristol. The work is described in an article published in Nature Communications this week.

The arrangement of molecules in an organic crystal can be achieved in a number of different ways. These variations, or polymorphs, can have a profound effect on the physical properties of the resultant crystal.

Control over which polymorph grows can be extremely difficult and has been long sought after, especially in the pharmaceutical industry where the differing properties of polymorphs can have a drastic effect on the efficacy of a drug. This was shown starkly in 1998 when ritonavir, an antiretroviral medication used to treat HIV/AIDS, unexpectedly transformed to another polymorph, resulting in a significant change in bioavailability and subsequent withdrawal from use. The ability to directly control polymorphism in a simple way would therefore be a significant and welcome advance.

Dr Simon Hall and Jason Potticary in the School of Chemistry and the Bristol Centre for Functional Nanomaterials (BCFN), along with colleagues at the University of Bath and Radboud University, Nijmegen, have successfully controlled polymorphism in the polyaromatic hydrocarbon coronene, producing a crystal structure that had never before been observed. They achieved this by simply growing crystals in the presence of strong magnetic fields, which suppress the growth of the usual polymorph, thereby allowing the new one to grow in preference.

The new polymorph, which they name beta-coronene, exhibits substantially altered electronic and physical properties when compared to those of the usual polymorph. The change in the optical behaviour of the crystal is of particular note, with the new polymorph being a panchromatic light absorbing material, potentially of interest to the solar cell and photovoltaic communities.

Dr Hall said: “The application of magnetic fields to intentionally control polymorphism is entirely novel and opens up the possibility of discovering magnetically accessible polymorphs in other crystal systems such as organic solid-state lasers, field-effect transistors and most tantalizingly, pharmaceuticals.”