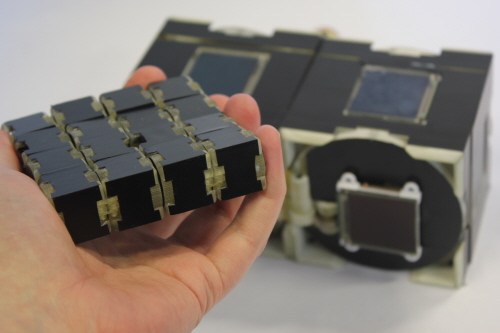 A prototype for an interactive mobile device, called Cubimorph, which can change shape on-demand will be presented this week at one of the leading international forums for robotics researchers, ICRA 2016, in Stockholm, Sweden [16-21 May].

There has been a growing interest toward achieving modular interactive devices in the human computer interaction (HCI) community, but so far existing devices consist of folding displays and barely reach high shape resolution.

Cubimorph is a modular interactive device that holds touchscreens on each of the six module faces and that uses a hinge-mounted turntable mechanism to self-reconfigure in the user’s hand.  One example is a mobile phone that can transform into a console when a user launches a game.

At the conference the researchers will present a design rationale that shows user requirements to consider when designing homogeneous modular interactive devices.

The research team will also show the Cubimorph mechanical design, three prototypes demonstrating key aspects - turntable hinges, embedded touchscreens and miniaturisation and an adaptation of the probabilistic roadmap algorithm for the reconfiguration.

Dr Anne Roudaut, Lecturer from the University’s Department of Computer Science and co-leader of the BIG (Bristol Interaction Group), said: “Cubimorph is the first step towards a real modular interactive device.  Much work still needs to be achieved to put such devices in the end-user hands but we hope our work will create discussion between the human computer interaction and robotics communities that could be of benefit to one another other.”

About the Bristol Interaction Group (BIG)
The Bristol Interaction Group (BIG), based in the University of Bristol’s Department of Computer Science, is united by a common interest in creative interdisciplinarity.  BIG acts as a hub for collaboration between social scientists, artists, scientists and engineers to combine efficient, aesthetic and innovative design. The group is particularly interested in areas which couple the design of devices with deployment and evaluation in public settings. Members of the group have expertise in research areas spanning human-computer interaction, visual, auditory and haptic perception, visualisation and sonification, touch and gestural input, tangible interfaces, augmented and virtual reality, wearable and on-body computing, sustainable interaction design, digital engagement, interactive fabrication as well as flexible and actuated devices.