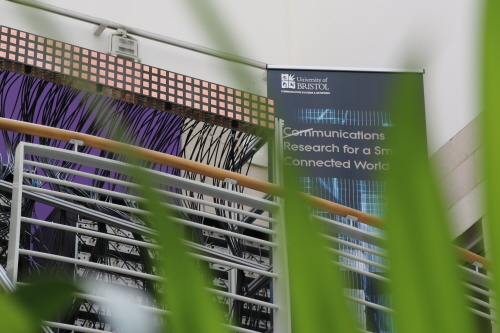 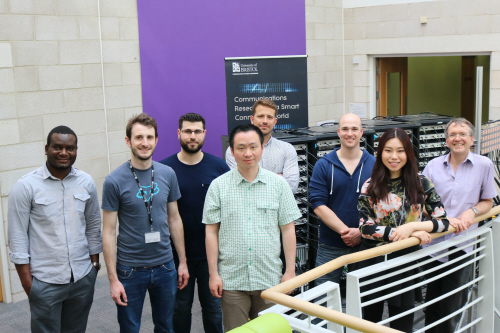 A team of 5G engineers from the Universities of Bristol and Lund has once again set a new world record for wireless spectrum efficiency, less than two months after setting the first one.

In an experiment last week [Wednesday 11 May] using 128 base station antennas, the research group managed to serve 22 users, each modulated with 256-QAM, on the same time-frequency resource.  With an identical frame structure they used in the previous experiment, this would equate to a rate of 145.6 bits/s/Hz on a single 20 MHz radio channel.

The team beat its earlier record of 79.4 (bits/s)/Hz for 12 users set in March, and the rate of 71 (bits/s)/Hz that Facebook achieved for 24 users last month with its 96-antenna ARIES array.

Multiple antenna technology, referred to as MIMO, is already used in many Wi-Fi routers and 4G cellular phone systems. The group’s latest achievement with massive MIMO arrays, which are cellular base stations with dozens of antennas deployed at the base station, shows that this technology could deliver ultra-fast data speeds to more smartphones and tablets than ever before.

Industry has said it will require a 1,000-fold increase in capacity in order for 5G to function as anticipated.  Massive MIMO technology is important if increased capacity is to be reached but it is thought that much of the 5G capacity can and will come in the longer term from using 5G technologies such as millimetre-wave (mmWave) and beamforming.

Professor Andrew Nix, Dean of Engineering and Head of the CSN Group, commented: “Unlike at mmWave frequencies, below 6GHz, very little new spectrum is anticipated for 5G services. To meet capacity demands in the microwave bands the only solution is to deploy technologies offering radically enhanced spectral efficiency; hence the global importance of massive MIMO and the significance of smashing through the 100 bits/sec/Hz barrier.”

In its demonstration conducted in the atrium of Bristol’s Merchant Venturers Building, the team used flexible prototyping platform from National Instruments (NI) based on LabVIEW system design software and PXI hardware.

The hardware behind this demonstration was provided to Bristol University as part of Bristol Is Open, a joint venture with Bristol City Council that aims to become the world’s first Open Programmable City

Spectrum and power efficient wireless communications are core to Bristol University’s Communication Systems and Networks (CSN) Group and the EPSRC Centre for Doctoral Training (CDT in Communications as well as to the Department of Electrical and Information Technology at Lund University.

Liang Liu, Associate Professor with the Faculty of Engineering at Lund University, said: “In addition to investigating spectrum efficiency gains, an initial power control algorithm was tested, users were placed in different locations and use of the equipment over night to obtain calibration data for comparison purposes with the Lund set-up”

Fredrik Tufvesson, Professor of Radio Systems at Lund University, added: “Field trials in different deployment scenarios is needed to validate the concept of massive MIMO and we are looking forward to the future mobility test at both universities”

Mark Beach, Professor of Radio Systems Engineering in the Department of Electrical and Electronic Engineering and Manager of the EPSRC CDT in Communications, explained: “Rapid deployment and experimentation of this scale and complexity was made possible through collaborative efforts of post graduate students and academic staff at both Universities. The results are a true testament of our efforts and a noteworthy contribution towards the evolution of 5G.”

About the Communication Systems & Networks (CSN) Group
The CSN Group was formed in 1985 to address the research demands of the fixed and wireless communications sectors.  It combines fundamental academic research with a strong level of industrial application. The Group has well-equipped laboratories with state-of-the-art test and measurement equipment and first-class computational facilities. Recently the Group has joined forces with the University’s High Performance Networks (HPN) Group to form the Smart Internet Lab.

About Lund University
Lund University seeks to be a world-class university that works to understand, explain and improve our world and the human condition. The University is ranked as one of the top 100 in the world and tackle complex problems and global challenges and work to ensure that knowledge and innovations benefit society. The University has 42,000 students and 7,680 employees and provides education and research in engineering, science, law, social sciences, economics and management, medicine, humanities, theology, fine art, music and drama.

About National Instruments
Since 1976, NI has made it possible for engineers and scientists to solve the world’s greatest engineering challenges with powerful platform-based systems that accelerate productivity and drive rapid innovation. Customers from a wide variety of industries – from healthcare to automotive and from consumer electronics to particle physics – use NI’s integrated hardware and software platform to improve the world we live in.

About Bristol Is Open
How cities work is changing. Bristol Is Open, a joint venture between Bristol City Council and the University of Bristol, is a research infrastructure to explore developments in software, hardware and telecom networks that enable more interaction between people and places and more machine-to-machine communication. The project uses a high performance software defined network as the city operating system, then internet of things platforms and big data analytics feed an emerging number of smart city applications. This is giving people more ability to interact, work and play with the city that they live in, and will help cities address some of the biggest challenges of modern urban life. This is the Open Programmable City.