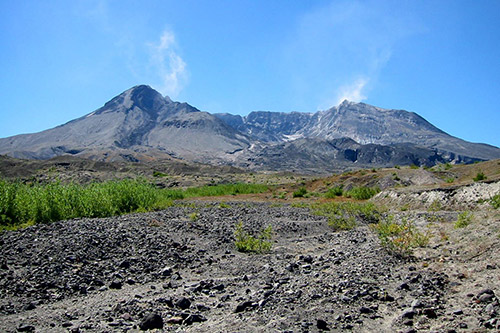 A study of how crystals moved in magma under the Mount St Helens volcano before the 1980 eruption may have signalled that an eruption was probable. Scientists say that similar measurements may indicate the possibility of eruption in some other, well-studied volcanoes, but caution that this is not a technique which could be applied to every volcano.

The eruption of Mount St Helens in Washington State, on 18 May 1980, was the most significant volcanic eruption in the contiguous United States in the last 100 years. The eruption column rose to 80,000 feet (24 kilometres) and deposited ash in 11 states. Fifty-seven people were killed as a direct result of the eruption. Since then, Mount St Helens has become one of the most studied volcanoes in the world, as scientists have tried to understand what caused the eruption.

Now a group of international researchers, led by the University of Bristol, studying the movement of crystals in magma believes that they may have found signs that could indicate a risk of future eruptions at Mount St Helens, and possibly some other volcanoes. The work is presented at the Goldschmidt geochemistry conference in Yokohama, Japan.

Professor Jon Blundy, lead researcher from the School of Earth Sciences at the University of Bristol, said: "We looked for signs in the way zoned feldspar crystals grew and moved beneath Mount St Helens in the build-up to the 1980 eruption. Crystals in erupted volcanic rocks are made up of concentric layers, like rings of a tree. The crystal layers, just a few hair's breadths across, have a distinct chemical composition that reflects the conditions under which they grew in the underground magma system prior to eruption.  In other words, they can show where they were formed and the pressure and temperature conditions at the time of formation.

"If you can read the record preserved in the zoned crystals, you can learn where and when molten magma has moved under the volcano. Rapid upwards movement of magma at depths of several km is a pretty good indication that something significant is happening. We have found a way of correlating the crystal composition to where they came from."

The researchers found that in the three years immediately before the eruption, there was a significant movement of magma under Mount St Helens, which carried the crystals from 12 kilometres below the volcano to around four kilometre below the volcano.

Professor Blundy added: "This indicates that the magma system beneath the volcano had become destabilised, probably in the months to years before the eruption.  What we are doing is not a real-time monitoring, but a retrospective study of what happened prior to the last eruption. Now we have found this movement, it's reasonable to assume that similar movement will precede any further eruptions from this and perhaps many other volcanoes."

The researchers will continue to monitor Mount St Helens, but they hope to be able to begin to monitor the record of zoned feldspar crystals in the magma of other well-studied volcanoes, such as Uturuncu in Bolivia, Mt Pinatubo (Philippines), and Bezymianny (Russia).

Professor Blundy explained: "There is probably no single factor which can predict when a volcano erupts. What we have found, namely destabilisation of deeply-stored magma and its ascent to shallow levels in the crust, may be one key factor, which may be especially useful in circumstances where we can monitor a volcano closely over a period of years."

Associate Professor Georg Zellmer, from Massey University, New Zealand, said: "The study of chemical variations in crystals has become a key indicator of magmatic processes under active and dormant volcanoes. Refining the pressure-temperature-time resolution of this record is at the forefront of ongoing research in this field. The critical next step towards real-time volcanic hazard mitigation will be to link such data with geophysical volcano monitoring efforts."

Jon has been awarded the Ringwood Medal in recognition of his ground-breaking application of (experimental) petrology to address major problems in both academic and economic research, and notably for subduction zone magmatism.

The Goldschmidt Conference is co-sponsored by the Geochemical Society and the European Association of Geochemistry. Goldschmidt2017 will take place in Paris, France.