Museum of the Moon, a new artwork by Luke Jerram, to be unveiled at Balloon Fiesta 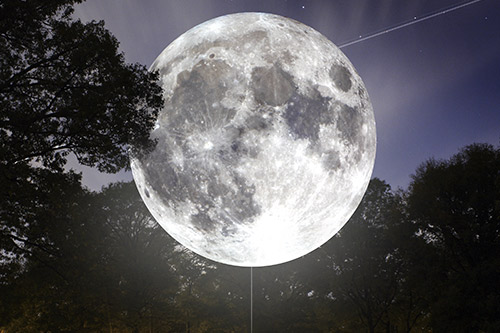 A new 'moon' will rise over the Bristol International Balloon Fiesta this year thanks to an exciting new artwork by Luke Jerram, created in partnership with the University of Bristol and other local organisations.

The Bristol artist, whose Park Street water slide, street pianos and fleet of abandoned boats in Leigh Woods became massive draws for visitors to the city, has created a work called Museum of the Moon, which will be seen in public for the first time at this year's Fiesta in Ashton Court from 11 to 14 August.

Measuring seven metres in diameter, Luke Jerram's moon will feature detailed NASA imagery of the lunar surface. Each centimetre on his moon will represent 5km on the surface of the Earth's largest natural satellite.

Floating above the fiesta for the weekend, it will also feature in the hugely popular nightglows, being illuminated as the hot air balloons light up in time to the music, and festival goers will be encouraged to 'moonbathe' beneath it.

The Museum of the Moon is being made by Cameron Balloons, one of the best-known companies in the city.

It will highlight ongoing lunar exploration and research, will also come with its own music, with a surround-sound composition created by BAFTA and Ivor Novello award-winning composer Dan Jones.

Luke Jerram said: "Different cultures around the world have their own historical, cultural and religious relationships to the moon, so depending on where the Museum of The Moon is presented in the world, its meaning and interpretation will shift. As the artwork tours, new compositions will be created and performed by a range of established composers and musicians, so adding to the museum's collection.

"Like the moon, this artwork acts as a 'cultural mirror' that allows us to observe and contemplate cultural differences around the world. As it tours, new stories and meanings will be collected and compared from one presentation to the next."

The Museum of the Moon has been co-commissioned by a number of creative organisations coming together. These include: At-Bristol Science Centre, Bristol International Balloon Fiesta, Lakes Alive, Provincial Domain Dommelhof, Norfolk & Norwich Festival, Brighton Festival, Greenwich+Docklands International Festival and Without Walls.

The artwork has been created in partnership with the University of Bristol, UK Space Agency and The Association for Science and Discovery Centres.

Dr Erik Lithander, Pro Vice-Chancellor at the University of Bristol, said: "Luke's latest project sounds and looks fantastic. We're very excited to be supporting it and can't wait for it to be unveiled at the Balloon Fiesta.

"As a university, we have a long history of researching the solar system - from analysing moon rocks collected during the first landing of a man on the moon in 1967 to our staff taking part in missions to the Mars Desert Research Station in Utah. Museum of the Moon will be a wonderful way to bring such knowledge to life, in Bristol and beyond."

After being premiered at the Bristol International Balloon Fiesta, the artwork will be shown at the following festivals:

For more information, visit the Museum of the Moon website and follow the #MuseumOfMoon hashtag on social media.

The 5.5GB image used to create the 120dpi moon artwork, was created by the Astrogeology Science Centre in the USA. The imagery was taken by a NASA satellite carrying the Lunar Reconnaissance Orbiter Camera launched in 2010.

Luke Jerram earned Bristol global attention when he installed giant waterslide Park and Slide down the city's Park Street in 2014. Last year, commissioned by the National Trust, he installed a flotilla of fishing boats in Leigh Woods, as an artwork and venue, to mark Bristol's year as European Green Capital.

Since 2008 his celebrated street pianos installation 'Play Me, I'm Yours' has been presented in more than 50 cities and enjoyed by more than 100million people around the world. Launched by the French Minister of Culture in Paris and Mayor Bloomberg in New York City, the installation has been covered in almost every newspaper and TV station around the globe.

Dan Jones is a BAFTA and Ivor Novello Award-winning composer and sound designer whose film scores include Shadow of the Vampire (starring John Malkovich and Willem Dafoe) and In Transit (also starring John Malkovich. He has written music for all the major British television broadcasters and his work includes Sir David Attenborough’s series The Life of Mammals.