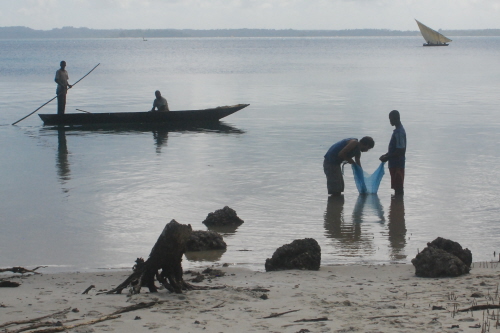 Archaeologists studying the distribution of ancient rice believe they may be close to solving one of the enduring mysteries of the ancient world - how people of South East Asian origin ended up living on the African island of Madagascar, 6,000 km away.

Teams from the universities of Bristol, Oxford and Queensland excavated 18 sites in Madagascar, Comoros, and along the East African coast and recovered over 2,500 seed remains.  The researchers were able to show that typically South East Asian crops, such as rice and mung bean, are found on Madagascar and Comoros, while contemporary sites in Africa largely relied on indigenous crops.

This is thought to be the first archaeological evidence that settlers from South Asia are likely to have colonised the island over a thousand years ago. The findings are published in the journal, Proceedings of the National Academy of Sciences (PNAS).

Genetic research has confirmed that the inhabitants of Madagascar do indeed share close ancestry with Malaysians, Polynesians, and other speakers of what is classed the Austronesian language family. To date, archaeological research has identified human settlements in Madagascar that belong to the first millennium, but had no definitive evidence that they were of Austronesian origin. The findings of rice and mung bean in early levels provides the first evidence that there were indeed long distance voyages across the Indian Ocean.

The researchers examined residues obtained from sediments in the archaeological layers, using a system of sieves and water. In this process they recovered carbonised seed remains that could be individually identified and directly dated using radiocarbon. In material from the 8th and 10th centuries AD, they noted a distinct pattern, with African crops concentrated on the mainland and the islands closest to the mainland. In Madagascar and the neighbouring Comoros Islands, in contrast, early subsistence focused on Asian crops.

Professor Mark Horton of the Department of Archaeology and Anthropology at the University of Bristol, who led the excavations for the project on Zanzibar and Comoros, said:  "The origins of Southeast Asian settlers in Africa has long puzzled historians and archaeologists. This is the first really clear archaeological evidence that they did indeed make extraordinary journeys across 4,000 miles of the Indian Ocean during the first millennium AD."

Dr Nicole Boivin, project leader from the School of Archaeology at the University of Oxford and Director of the Department of Archaeology at the Max Planck Institute for the Science of Human History, added: "We've been able to not only to show for the first time an archaeological signature of Austronesians, we’ve also shown that it seems to extend beyond Madagascar. This is really exciting, and highlights how much we still have to learn about this fascinating migration."