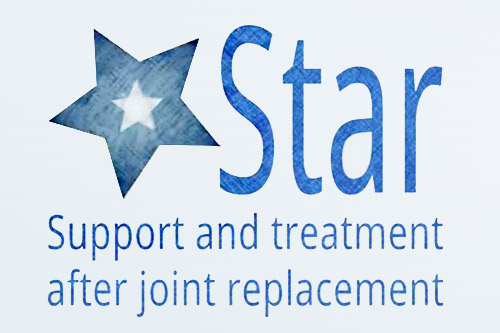 The University of Bristol's Musculoskeletal Research Unit has won the special prize in the National Institute for Health Research (NIHR) New Media Competition for a film that shows how patient involvement has been embedded into the STAR (Support and Treatment After joint Replacement) research project and the difference it has made.

The film, which was developed in conjunction with the University's Musculoskeletal Research Unit's Patient Advisory Group, won the special prize for its demonstration of the positive impact of patient and public involvement in a research project.

The film shows the importance of drawing upon the expertise of service users to shape research. The Patient Advisory Group has helped the research team to develop materials for potential participants, reduce the time it takes to take part and check the project’s progress. They will also be involved in helping to decide how best to make the research findings accessible to a wide audience.

Entries were judged by members of the public, following public film screenings in York, Sheffield and Devon as well as a panel from the NIHR.

Amanda Burston, Patient and Public Involvement Co-ordinator in the School of Clinical Sciences Musculoskeletal Research Unit, on winning the competition, said: "In our research unit, members of the public and patients work alongside research staff. The media competition was an excellent opportunity to highlight their impact on the research. The positive feedback on our film has inspired us to make more and we are currently working on three new films. We are continuing to work with the STAR PPI group and they will be helping to interpret the results of our qualitative interviews and reviewing the pilot of the STAR trial which starts in October."

The NIHR competition, which aims to raise awareness of NIHR-funded research through video, invites anyone funded or supported by the NIHR, and patients and the public involved in NIHR research to submit short films which communicate their research and its impact on patients.

The overall winning submission, Partnership for sight was created by NIHR Clinical Lecturer Dr Mariya Moosajee with her team of researchers at Moorfields Eye Hospital and the University College London Institute of Opthalmology. The winning film explains Dr Moosajee’s research into genetic eye disease and her work to find a cure to prevent people from losing their vision and going blind. The film is told through the perspective of Matthew Murrell, who narrates the film and is a patient taking part in the study.

An extra Highly Commended honour was also awarded to NIHR Clinician Scientist Dr Emma Crosbie of the University of Manchester for her film about the Womb Cancer Alliance. The film was recognised by the judges for effectively demonstrating how patients can help researchers to decide on research priorities.

Simon Denegri, NIHR National Director for Patients and the Public and Chair at INVOLVE, said: "We couldn't do research at the NIHR without the help of patients and the public and these videos show why.  Each shows how researchers are drawing upon the experience of patients to improve their work - from identifying research priorities to improving research design.  The winners are to be complimented for the way in which they have used new media to get this message across with such clarity and impact. They deserve to be widely seen."

Professor Chris Whitty, Chief Scientific Adviser at the Department of Health, added: "It's fantastic to see that so many NIHR researchers across the country are using new media to raise awareness of NIHR research which will strengthen the NHS and improve the lives of patients. It is a great way of communicating our research to patients and the public and I hope it encourages many more to pick up a camera or a mobile phone and have a go at sharing their brilliant research stories via this medium."