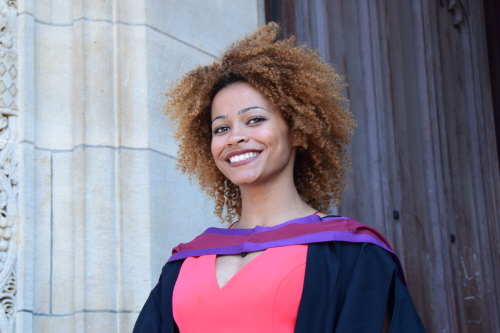 Jazmin Sawyers graduating from the University of Bristol

It’s been a busy few weeks for University of Bristol student Jazmin Sawyers, who’s not only achieved a 2.1 in her Law degree but is also busily training for the biggest sporting event of her career – the Rio 2016 Olympics.

The long jumper secured her place in Team GB with a personal best leap of 6.75m to win the British Championships in Birmingham last month. Moments later she opened her degree results to discover she’d achieved at 2.1.

After juggling the training demands required to be a professional athlete with three years of intense studying, graduating today has been a momentous occasion.

Jazmin, 22 and based in Bath, said: "It's been such a whirlwind, I haven’t really come back down to earth since winning a place at the Olympics and getting my degree results. I didn’t dare open my results until after the British trials in case I was disappointed and it affected my performance, so finding out I'd got a 2.1 on top of qualifying was just incredible.

"It’s been hard to juggle everything but the University has been massively supportive. They allowed me to have all my tutorials on two days, and I was able to watch recordings of the lectures – it definitely allowed me to train to the level I needed to. My exams were even moved so that I could compete in the Commonwealth Games."

A career in law is on hold for now as Jazmin wants to give athletics her full attention and commitment.

Fresh from winning the British Championships, she secured a surprise silver at the European Championships in Amsterdam with a wind-assisted jump of 6.86m – a second medal to add to her Commonwealth silver from Glasgow 2014.

And she's aiming high for the Rio Olympics, which get underway in the Brazilian city on 5 August.

"I tend to produce my best jumps in major championships. I’m in the best shape I’ve ever been so I want to keep on that trajectory."

Jazmin will be flying out to Brazil on 3 August for a Team GB training camp. The long jump qualifying takes place on 16 August before the final on 17 August.

She's been a member of the University of Bristol's Performance Squad, a programme designed to support talented athletes during their time at university.