Social sunbathing in the mint-sauce worm 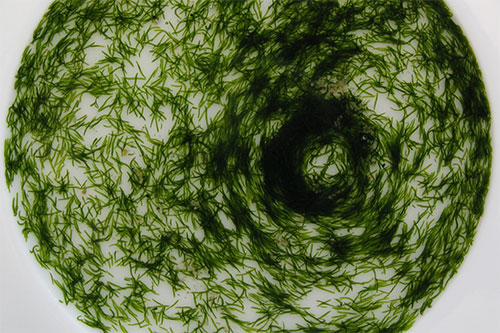 Commonly known as the ‘mint-sauce worm’ due to its bright-green colour, S. roscoffensis is found in shallow water on sheltered sand beaches at certain sites on the Atlantic Coast © Professor Nigel Franks

Self-organizing social behaviour in the so-called plant-animal, a ‘solar-powered’ species of marine flat worm that gains all its energy from the algae within its own body, has been demonstrated by researchers from the University of Bristol.

Professor Nigel Franks in the School of Biological Sciences and colleagues, especially Dr Alan Worley, formerly of the School of Physics, made direct comparisons between videos of the real worms and computer simulations of virtual worms with different patterns of behaviour.  This showed that individual plant-animal worms (Symsagittifera roscoffensis) interact with one another to coordinate their movements.

Commonly known as the ‘mint-sauce worm’ due to its bright-green colour, S. roscoffensis is found in shallow water on sheltered sand beaches at certain sites on the Atlantic Coast, including the coasts of Wales and the Channel Islands.  Adult worms survive entirely on the nutrients produced by photosynthesizing symbiotic algae living in their bodies, hence their renown as the ‘plant-animal’.

These 3mm-long worms sunbathe on beaches when the tide is out and bury themselves in the sand as the sea returns.  The Bristol study shows how with increasing density they form small flotillas, and then circular mills.  The authors hypothesize that these interactions eventually lead to the mat-like biofilms observed on sandy beaches.  These social structures may help the worms to achieve safety in numbers and the right conditions for their unusual way of life.

Professor Franks said: “Such social behaviour helps the worms to form the dense biofilms that have been observed on certain sun-exposed sandy beaches of the East Atlantic, and to become in effect a super-organismic seaweed in a habitat where macro-algal seaweeds cannot anchor themselves.”

Symsagittifera roscoffensis is a ‘model organism’ in many areas in biology (including stem cell regeneration) but its social behaviour has been comparatively neglected.

“Our study suggests this remarkable organism also seems to be an ideal model for understanding how individual behaviours can lead, through collective movement, to social assemblages,” Professor Franks added.