Women are seen more than heard in online news 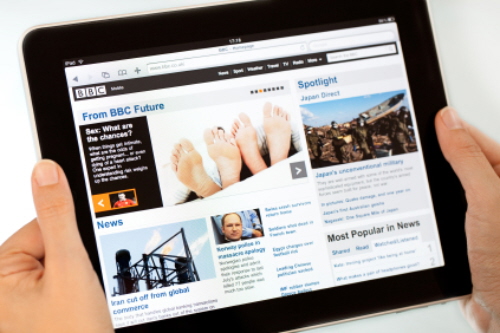 It has long been argued that women are under-represented and marginalised in relation to men in the world’s news media. New research, using artificial intelligence (AI), has analysed over two million articles to find out how gender is represented in online news. The study, which is the largest undertaken to date, found men’s views and voices are represented more in online news than women’s.

What is perhaps more interesting is that the research found - while being overall under-represented - women appear proportionally more in images than men, while men are mentioned more in text than women.  A breakdown of topics shows that women feature more in articles about fashion, followed by entertainment and art, while being least present in topics including sport and politics.

A team of AI experts at the University of Bristol’s Intelligent Systems Laboratory (ISL), led by Nello Cristianini, Professor of Artificial Intelligence, teamed up with social scientist, Dr Cynthia Carter from Cardiff University, to ask a very old question on a very new scale.  How many men and how many women are mentioned in the news, or portrayed in newspaper images, over a long period of time and in over hundreds of different newspapers?

Modern AI, which is frequently in the news, is a great tool to support research and can automate tasks that would take humans an impossible amount of person-hours to complete.  It is now possible to automate the task of recognising the gender of a face with a remarkable level of accuracy, and it is also possible to detect references to people in online text, along with their gender.

The paper, published in PLOS ONE, reports the findings from a large-scale, data-driven study of gender representation in online English language news media. The researchers analysed both words and images to give a broader picture of how gender is represented in online news.

The team gathered a body of news consisting of 2,353,652 articles collected over a period of six months from more than 950 different news outlets.  From this dataset, they extracted 2,171,239 references to named persons and 1,376,824 images resolving the gender of names and faces using AI.

The researchers found that males were represented more often than females in both images and text, but in proportions that changed across topics, news outlets and style.

Additionally, the proportion of females was consistently higher in images than in text for virtually all topics and news outlets.  Women were more likely to be represented visually than mentioned as a news actor or source.

Professor Nello Cristianini from the University’s Department of Engineering Mathematics, said: “Just a few years ago, it would not have been possible for a computer to determine the gender of a face, or to process such a large amount of text, with the ecessary accuracy and speed.  The analysis of millions of articles and images is one of the ways in which modern AI can help scientific research. When Big Data meets AI we see benefits in many areas of business and technology, now we can also see benefits in the way we do science.”

Further information about the study is available at: thinkbig.enm.bris.ac.uk/women-in-the-news

The research is part of the ThinkBIG EU project led by Professor Nello Cristianini from the Intelligent Systems Laboratory (ISL) at the University of Bristol.

The University has a long tradition of excellence in artificial intelligence (AI), with research groups in Engineering dating back to the 1970s and 1980s.