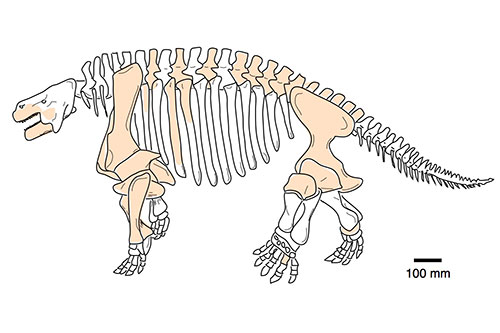 The skeleton of Shihtienfenia, a large pareiasaur from the latest Permian of Shanxi Province, China. The skeleton outline is based on close relatives from Russia, and known bones are shaded. 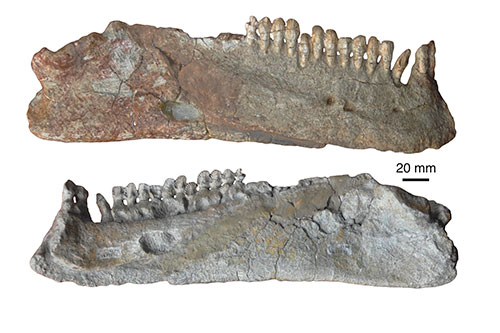 Lower jaw of the Chinese pareiasaur Shihtienfenia, seen in external and internal views. The deep jaw shows it had powerful jaw muscles, and the small leaf-shaped teeth show it fed on plants.

Long before the dinosaurs, hefty herbivores called pareiasaurs ruled the Earth. Now, for the first time, a detailed investigation of all Chinese specimens of these creatures – often described as the ‘ugliest fossil reptiles’ – has been published by a University of Bristol palaeontologist.

Pareiasaurs have been reported from South Africa, Europe (Russia, Scotland, Germany), Asia (China), and South America, but it is not known whether there were distinct groups on each of these continents.

In a new study published today in the Zoological Journal of the Linnean Society, Professor Mike Benton of Bristol’s School of Earth Sciences shows there are close similarities between Chinese fossils and those found in Russia and South Africa, indicating that the huge herbivores were able to travel around the world despite their lumbering movement.

Professor Benton said: “Up to now, six species of pareiasaurs had been described from China, mainly from Permian rocks along the banks of the Yellow River between Shaanxi and Shanxi provinces.  I was able to study all of these specimens in museums in Beijing, and then visit the original localities.  It seems clear there were three species and these lived over a span of one to two million years.”

Pareiasaurs were hefty animals, two to three metres long, with massive, barrel-shaped bodies, short, stocky arms and legs, and tiny head with small teeth.  Their faces and bodies were covered with bony knobs.

It is likely the pareiasaurs lived in damp, lowland areas, feeding on huge amounts of low-nutrition vegetation.  No stomach contents or fossilized faeces from pareiasaurs are known to exist, but in Russia, pareiasaurs have been found with evidence they had made wallows in the soft mud probably to cool off or coat themselves in mud to ward off parasites.

The new study confirms that the three Chinese pareiasaur species differed from each other in body size and in the shapes of their teeth.

Professor Benton added: “My study of the evolution of pareiasaurs shows that the Chinese species are closely related to relatives from Russia and South Africa.  Despite their size and probably slow-moving habits, they could walk all over the world.  We see the same sequence of two or three forms worldwide, and there is no evidence that China, or any other region, was isolated at that time.”

Pareiasaurs were the first truly large herbivores on Earth, and yet their tenure was short.

As in other parts of the world, the species in China were wiped out as part of the devastation of the end-Permian mass extinction 252 million years ago, when 90 per cent of species were killed by the acid rain and global warming caused by massive volcanic eruptions in Russia.

Without forests, landscapes were denuded of soils which washed into the seas.  Shock heating of the atmosphere and oceans as a result of the massive release of carbon dioxide and methane also killed much of life.  The end-Permian mass extinction killed off the pareiasaurs after they had been on Earth for only 10 million years.

‘The Chinese pareiasaurs’ by Michael J. Benton in Zoological Journal of the Linnean Society