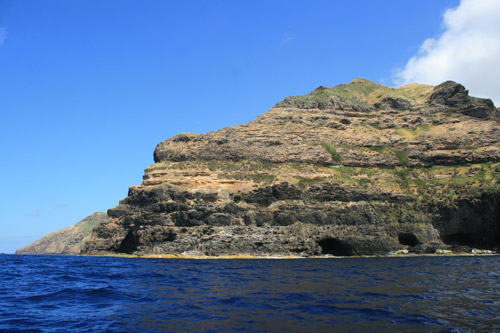 It has been a well-established fact that, as they get older, ocean islands slowly sink.

We know that since Charles Darwin's time. Based on observations made during the Beagle's voyage, he correctly formulated that sinking islands start to be fringed by rings of coral reefs, leading to atoll formation.

This is because the tectonic plates they rest on gradually cool and become denser over time, causing the seafloor, and therefore the island itself, to slowly drop.

Another reason for this trend is the enormous weight volcanic edifices exert on the underlying seafloor, which forces the tectonic plate to bend, while islands are being built.

However, there are a small number of islands that buck this trend – actually rising out of the ocean, rather than sinking.

This phenomenon was seen as rare, and mostly associated with the flexural bulge created by younger islands being loaded on the seafloor, which, like opposing sides on a balance scale, would cause other islands in the periphery to rise while they sink.

This is the case of O'ahu and Moloka'i in the Hawaiian chain, which experienced limited uplift due to the loading of the younger and vigorously active island of Hawaii , located "upstream" along the hotspot chain.

Scientists working in the Atlantic Ocean, however, noticed that in this part of the world several islands showed signs of significant uplift, a trend that could not be explained by the same flexural model as the rising islands along the linear Hawaiian chain.

One island in particular – Santa Maria in the Azores, an archipelago located in the mid-North Atlantic – was especially puzzling.

This island rests on very young seafloor, which is expected to be rapidly subsiding. In fact, most other islands in this archipelago are indeed sinking. Santa Maria however, shows signs of significant uplift, such as old shorelines now located several tens or even hundreds of meters above sea level.

To try and come up with some answers, a team of geologists, headed up by Dr Ricardo Ramalho from the School of Earth Sciences at the University of Bristol, studied the island and their findings have been published in the Geological Society of America Bulletin.

They have reconstructed the geological history and the record of vertical movements of Santa Maria, and what they found was startling.

Dr Ramalho said: "The geological record of Santa Maria shows that the island emerged about 6 million years ago, and as it grew, the island subsided as expected.

"The island was even truncated by marine erosion, being partially or totally submerged in between 5.3 and 4.1 million years ago."

It then rose above sea level again when renewed volcanic activity was capable of outpacing subsidence to form a new island.

At about 3.5 million years ago, however, volcanism on Santa Maria waned, and unexpectedly the island started to uplift, a trend that continued to the present day.

Dr Ramalho added: "This reversal suggests that the magmatic system turned from dominantly volcanic to dominantly intrusive emplacement, which basically means that magma instead of rising to the surface started to accumulate below the island, slowly contributing to jack the volcano upwards.

"Although the causes for this reversal are still enigmatic, it shows that magmatic activity may be very long-lived after surface volcanism stopped that this behaviour could eventually be identified in the future in other settings."